Metafrax takes delivery of ‘wagons of the future’ 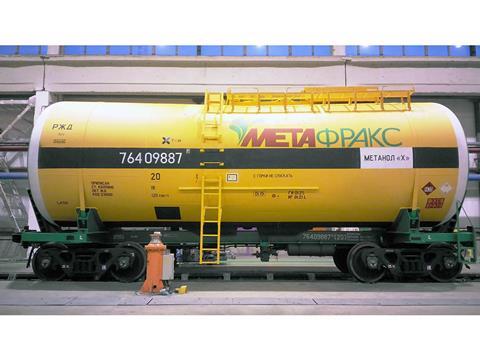 This is the second model of UWC tank wagon to use modern design techniques to increase capacity while complying with the GOST Tpr loading gauge, with the capacity of 71·7 tonnes or 94 m3 being 4·5 tonnes or 8·5 m3 more than typical older designs.

Alexey Sokolov, First Deputy CEO for Strategy & Product at UWC, said increasing payloads within the limits imposed by existing rail infrastructure offered a ‘logical and effective’ way to increase rail freight volumes, and Russian Railways had confirmed that the Tpr stock could operate ‘practically without restrictions’.

‘These are wagons of the future, to which there are no counterparts in Russia or in the entire post-Soviet space’, said Igor Chukreev, Head of Metafrax’s transport department. ‘We will be the first company to load, dispatch and evaluate them, and this work is of great interest to us.’

UWC estimates that around 1 400 methanol tank wagons will reach the end of their lives over the next five years, about a third of the national fleet.