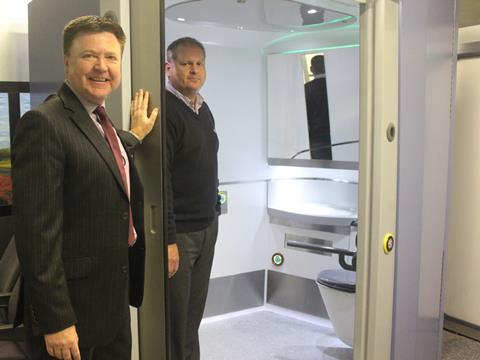 Birley Manufacturing, APA Design and Datum Composites have developed a prototype accessible toilet module designed to meet TSI PRM requirements. It has a seals one-piece floor moulding to prevent the leakage of liquids and so reduce the risk of underfloor corrosion.

TÜV Rheinland has certified that Huawei’s GSM-R 5.0 Abis over IP complies with railway standards, enabling it to be used instead of TDM-based networks. GSM-R Abis over IP simplifies operational demands by consolidating two transmission networks into one, so operators with existing IP infrastructure can build a parallel GSM-R network without additional costs and merge existing GSM-R networks into a single IP-based transmission system.

Building on a long-running programme with gear units, Voith has launched a Scharfenberg coupler exchange programme which enables operators to swap couplers needing maintenance with overhauled ones drawn from a pool, returning the coupler for maintenance. This is intended to reduce downtime and provide greater cost certainty.

Kilfrost has launched a de/anti-icing fluid which can be sprayed on ballast to prevent it freezing and ensure it can be transported and distributed. The biodegradable Kilfrost AGT works by removing moisture from the ballast surface and create a coating to prevent moisture forming. Kilfrost AGT can also be used to suppress the dust created by track renewal works, agglomerating particles and unlike water retaining its effectiveness after it has dried.