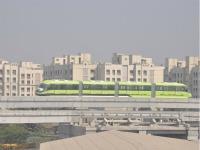 INDIA: Test running on the first 2∙2 km section of the Mumbai monorail between Wadala and Bhakti Park began on February 18. Completion of the entire 8∙2 km Phase 1 to Chembur is expected by August, with commercial services to start in November.

Scomi Engineering is supplying 15 four-car trainsets as part of a consortium with Larsen & Toubro which was awarded the Rs24∙6bn turnkey contract for the 19∙5 km straddle monorail in November 2008. According to Scomi, each train can accommodate 600 passengers, providing a total daily capacity of 300 000 passengers.

On January 26 2010 Mumbai Metropolitan Region Development Authority conducted a trial run of the car for the monorail, which was then scheduled to open in 2011.

The 11∙3 km Phase 2 between Jacob Circle and Wadala is expected to open in 2013.