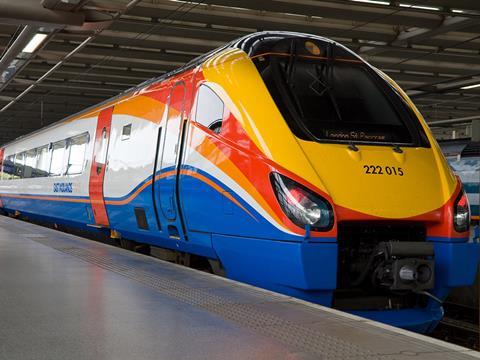 UK: Three bidders have prequalified to bid for the next East Midlands passenger franchise, the Department for Transport announced on March 1. They are:

DfT also confirmed that it had exercised an option for an extension of ‘up to a year’ of the current franchise held by Stagecoach which was scheduled to end on March 4 2018.

The East Midlands franchise includes inter-city services on the Midland Main Line from London to Leicester, Nottingham, Derby and Sheffield, as well as regional services in central England, and currently operates around 470 services a day carrying 26 million passengers/year. DfT is consulting with passengers, businesses and local authorities on the specification for the new franchise, ahead of issuing the invitation to tender in the next few months.

The franchise is likely to run for between seven and 15 years. Bidders will be asked to submit proposals to improve the quality, frequency and timings of journeys, to develop new services and to satisfy predicted growth in demand, in particular into London and on busy local services.

‘Network Rail is working on improvements which by 2019 will enable the next East Midlands franchise to deliver more carriages and faster journeys over the whole route, including almost twice as many seats into London St Pancras in the peak hours’, said Transport Minister Paul Maynard. ‘I am delighted that all these first class companies have demonstrated their confidence in our vision for the future of the rail industry in Great Britain by bidding for this key franchise.’

DfT said that ‘as for all rail franchise competitions’, it would ‘ensure that alternative plans are in place for the continued running of passenger services in the event that the department determines that the bids would not provide services in the most efficient or economic manner.’

Stagecoach has operated the franchise under the East Midlands Trains brand since 2007. 'We are proud of our track record', said Stagecoach Group Chief Executive Martin Griffiths. 'There is a huge opportunity to build on the network's success to create new jobs, build the skills of our people and improve connectivity across the region. We can also leverage our experience of bringing train and track closer together to develop plans that deliver a better customer experience to today's passengers and those we attract in the future.'

First Rail Managing Director Steve Montgomery said ‘both ourselves and Trenitalia have extensive expertise of running commuter, regional and long-distance services such as those that make up the East Midlands franchise’. He added ‘Trenitalia’s knowledge will add further depth and understanding as we develop our proposals to deliver passenger benefits that take full advantage of the significant investment that government and the industry are making in the region’s rail infrastructure.’

Trenitalia CEO Barbara Morgante said she believed that ‘the experience, competence, innovation and skills of Trenitalia and FirstGroup, developed in international markets, represent a perfect mix to run the East Midlands franchise together. Trenitalia is proud and ready to bring all its competencies to the partnership, both from a technical and commercial standpoint, developed in the highly-competitive Italian market.’