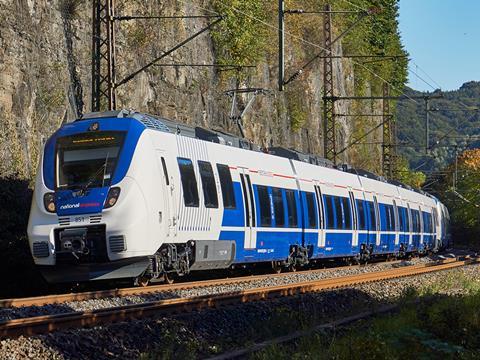 'The current UK rail market is one that we believe is not as attractive as our other growth opportunities', said Finch. While NEG is 'not ruling out' future bids in the UK, its rail focus is now on Germany where at least 30 contracts are expected to be tendered in the next three years.

German contracts are smaller and lower risk than UK franchises, with relatively low capital investment required. Germany also provides 'an emerging opportunity for entry in to other, complementary markets nearby', said Finch. Recent UK franchises had been won by bids anticipating double-digit compound annual revenue growth, and with costs of around £5m to £10m per bid NEG felt the UK market was 'increasingly unattractive'.

The Rhein-Münsterland-Express services launched in December 2015 carried more than 20 million passengers in their first full year, with 'improved operational performance compared to our predecessor'. NEG is 'engaged in discussions' with the local transport authorities to 'clarify certain aspects of our subsidy revenue entitlement', and a 'small' profit is expected in 2017.

Mobilisation has begun for the Rhein-Ruhr-Express contracts which start in June 2019 and December 2020. NEG said lessons from the UK market were being applied in Germany, where a 'customer-focused approach is less apparent'. Its priorities are enhancing marketing to drive sales, including online and digital, and improving live customer information across digital channels including social media.

On February 10 NEG completed the sale of c2c, its last UK rail business, to Trenitalia for a 'small' profit. This removed significant potential liabilities while generating £108m of cash to invest elsewhere. Although c2c was outperforming the ridership growth of 0·3% across train operators in London and southeast England, NEG was concerned that c2c's commitments to £30m of capital expenditure, lease fees for new trains and £900m of premium payments were looking 'increasingly challenging' in an 'increasingly unattractive market'.

Finch said 'the slowdown in UK rail passenger growth is likely to present significant challenges to many operators with very high premium obligations', and 'by moving swiftly and firmly' NEG has 'removed this risk and replaced it with the opportunity for further targeted investment'.