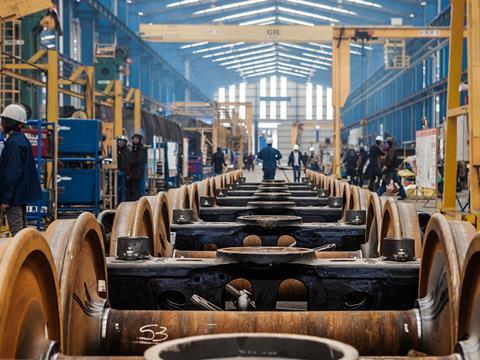 USA: A multi-year wagon supply and management agreement worth more than $1bn was announced by The Greenbrier Companies and Mitsubishi UFJ Lease & Finance Co on April 5

MUL President & CEO Tadashi Shiraishi said the leasing company had set an ‘ambitious’ target to grow its market share to become one of North America's top eight wagon lessors, with plans to expand its portfolio from 5 000 to 25 000 wagons in the next four years. It has committed to obtain its new wagons exclusively from Greenbrier until 2023, with 6 000 to be ordered by 2020. It will also expand its portfolio through a combination of lease syndications and used wagons owned by Greenbrier.

Greenbrier has previously supplied and currently manages almost 5 000 new and used leased wagons for MUL under a 2014 lease syndication and asset management partnership which was designed to establish MUL in North America.

The companies have now signed a memorandum of understanding to form an equally-owned entity to manage MUL’s fleet, with MUL to pay fees to Greenbrier. The agreement includes ‘firewall protections’ to ensure customer confidentiality.

‘The MoU we announced today advances Greenbrier's well-established strategy to reduce the amount of long-term capital invested in our Leasing & Services business as we drive greater transaction volume through our lease underwriting, syndication and asset management model’, said Greenbrier Chairman & CEO William A Furman. ‘From modest beginnings, Greenbrier has evolved a very successful, asset-light leasing and asset management business that today manages over 265 000 railcars and completed over $1·2bn in lease syndications during the last two years.’