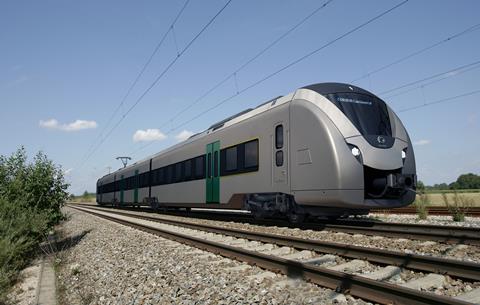 GERMANY: Alstom has been awarded a €100m contract to supply and maintain the first battery-electric version of its Coradia Continental multiple-unit family.

The 11 three-car BEMUs have been ordered by Mittelsachsen transport authority ZVMS, which has taken out a €49m loan from KfW IPEX-Bank, Nord/LB and Deutsche Kreditbank to finance the order. They are scheduled to enter traffic on Leipzig – Chemnitz service RE6 in December 2023, and will be maintained by the manufacturer until 2032.

‘Today, Alstom stands apart in being able to offer any form of emission-free traction currently on the market built into a proven solution’, said Gian Luca Erbacci, Senior Vice-President of Alstom Europe when the firm order was announced on February 5.

The BEMUs will be similar to 29 Coradia Continental EMUs ordered by ZVMS in 2014 for use on services to Dresden, Riesa and Zwickau. They will have 150 seats with tables and power sockets, including nine seats in first class, air-conditioning and space for six bicycles.

The BEMUs will replace locomotive-hauled coaches, providing passengers with modern facilities and reduced journey times five years before electrification of the route, which is planned for completion in 2028. The batteries will then be removed and the units will operate as conventional 15 kV 16·7 Hz EMUs.

The BEMUs are to be manufactured at Alstom’s Salzgitter plant. The roof-mounted lithium-ion battery subsystem will be supplied by Alstom’s traction centre of excellence at Tarbes in France, building on its experience with batteries fitted to the Coradia iLint fuel cell multiple-units, Citadis trams and Prima H3 locomotives.

The batteries will provide a maximum speed of 160 km/h and a range of up to 120 km in battery mode. Charging through the pantograph at Chemnitz and Leipzig stations is expected to take around 30 min.