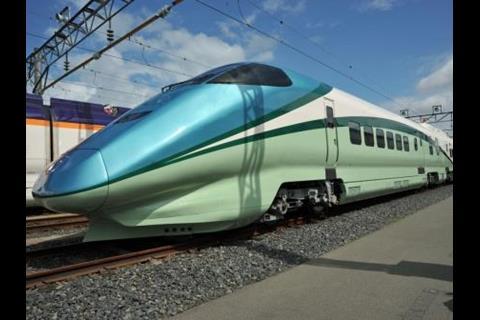 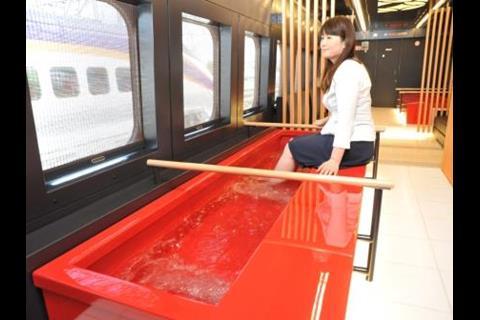 JAPAN: East Japan Railway will put into service a luxury trainset on its Yamagata Shinkansen with effect from July 19, as part of an ongoing programme to refresh the line’s fleet of mini-shinkansen trainsets.

Known as Toreiyu from a combination of Train + Soleil, the six-car trainset has been rebuilt from a former Series E3 unit made redundant by the introduction of 320 km/h Series E6 sets on Akita Shinkansen services last year. The train has been remodelled by Kawasaki Heavy Industry at a cost of ¥3bn.

Carrying up to 143 passengers, the unit will operate tourist-oriented services on the regauged section of the Yamagata Shinkansen between Fukushima and Shinjo, running at a maximum speed of 130 km/h. The train is expected to operate on 120 days a year, typically at weekends.

The exterior livery is inspired by Mount Gassan in Yamagata prefecture, with a blend of the green mountain and white from the Zao range, while the blue driving ends are intended to reflect the Mogami River.

Driving car 11 is fitted with reclining seats, whereas cars 12 to 14 have large birch tables and tatami chairs arranged in a 2+1 configuration; the backs of the chairs are decorated with fruit designs from the Yamagata region. Car 15 is a ‘relaxation room’ with a bar.

Highlight of the train is car 16, which has two foot-baths able to accommodate up to eight passengers at a time. The hot water is recycled, purified and recirculated using a jet stream. The seats around the footbaths have an overhanging lip and ‘wave plates’ designed to prevent water being spilled.