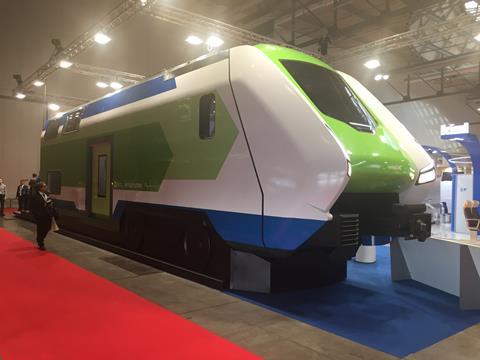 ITALY: Two mock-ups of the next generation of suburban and regional trainsets for Lombardia were formally presented at the Expo Ferroviaria trade fair in Milano on October 1.

Speaking at the event’s opening forum, Lombardia’s councillor for Infrastructure, Transport & Sustainable Mobility Claudia Maria Terzi explained that rail ridership in the region had increased by 19% since 2014 to an average of 800 000 passengers/day. Although travel patterns were dominated by the cities of Milano, Bergamo and Brescia, she felt that it was increasingly important to provide good public transport to the smaller communities across the region, putting rail at the heart of an increasingly integrated multi-modal network.

Recognising the need to improve the quality of service, reliability and comfort of local rail services, Terzi said Lombardia had committed more than €1bn to fund 161 new trainsets for local operator FNM, a figure that has subsequently been increased to 176. This will significantly reduce the average age of the fleet to around nine years by the time the last vehicles are delivered.

FNM Group President Andrea Gibelli explained that in order to meet Lombardia’s wider sustainable mobility objectives the group had framed its tender specifications to capture best international practice, and he had been heartened by the industry responses.

In September 2018, FNM awarded a framework contract with Hitachi Rail Italy for up to 120 double-deck EMUs based on the supplier’s 160 km/h Caravaggio platform, now being delivered to Trenitalia under the ‘Rock’ branding. Within this framework, FNM has placed an initial order for 30 four-car and 20 five-car units, with seats for 466 and 598 passengers respectively. Deliveries are expected to start within 20 months of contract signing.

Two months later, FNM selected Stadler to supply up to 50 Flirt diesel-battery hybrid multiple-units for use on its non-electrified routes; in this case the initial order was for 30 three-car sets, which will each have two Stage V low-emission diesel engines and two battery packs in the intermediate power module. 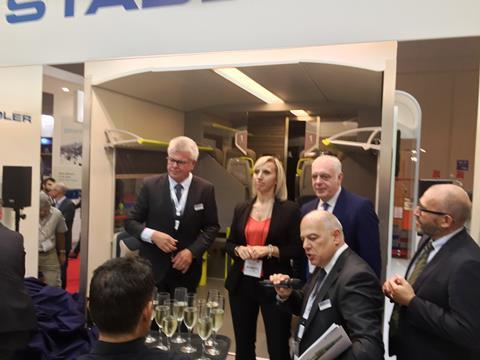 Both manufacturers were able to present a first glimpse of their new trains at Expo Ferroviaria, Hitachi showing a driving car mock-up and Stadler unveiling the interior layouts for both first and standard class. To meet Lombardia’s requirements to encourage active mobility, both vehicle types will have extensive provision to carry bicycles.

The second Expo Ferroviaria event to be staged in Milano by Mack Brooks, the 2019 show has attracted 280 exhibitors from 22 countries, of which 59 companies are exhibiting for the first time. These include Colas Rail Italy, ABB, JSW Steel Piombino, CRRC and Alpha Trains.