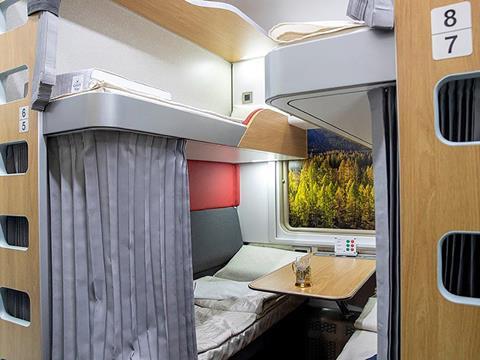 RUSSIA: The first platskartny coach to be modernised by the Vagonremmash factory in Tambov re-entered revenue service on March 18, following the completion of testing and certification. It is to be used on trains 19/20 Rostov-na-Donu – Moscow and 11/12 Anapa – Moscow.

Platskartny coaches offer the most basic, and cheap, accommodation on Russia’s very long distance trains. RZD had previously been concerned that the dormitory-style third class coaches were no longer attractive to passengers, and had considered only ordering sleeping cars with compartments in the future. However, following passenger feedback it decided to retain the traditional style of accommodation, but with upgrades to improve the passenger environment.

The modernisation retains the traditional semi-open layout without compartment doors, but curtains have been added to increase privacy and the berths now have power sockets. The coach is fully air-conditioned, and the toilets have a shower, baby changing table and built-in hair dryer.

Russian Railways’ long-distance passenger business Federal Passenger Co expects to have 50 of the modernised coaches in service by the end of the year.