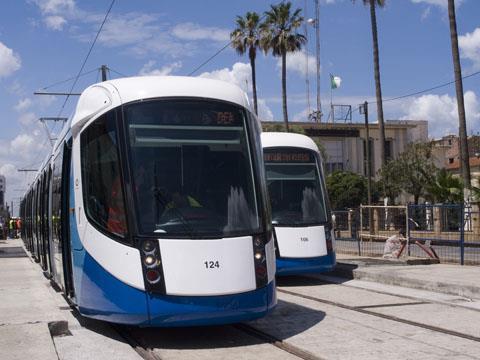 ALGERIA: On May 15 Algerian Transport Minister Amar Tou witnessed the start of trial running on Alger’s first tram project, which will run from Carrefour des Fusillés, near Hessein Dey railway station, to Dergana in the eastern suburbs of the capital city.

The initial trials are being carried out on a 2 km test track at Bordj El Kiffan, where the depot is located, and are intended to test the interface between the vehicles, catenary and track, as well as verifying traction, braking and speed performance. Testing will be rolled out along the entire route as construction is completed.

The tram line is being built as a turnkey project by the Méditerrail consortium, headed by Alstom, under a contract awarded by Entreprise du Métro d’Alger in 2006. The 23 km route with 38 stops will be operated by 41 Citadis vehicles. It is due to open by the end of this year.

Alstom is currently working on two other contracts from EMA for turnkey tram projects in Oran and Constantine.