Tramino runs for charity in Poznan 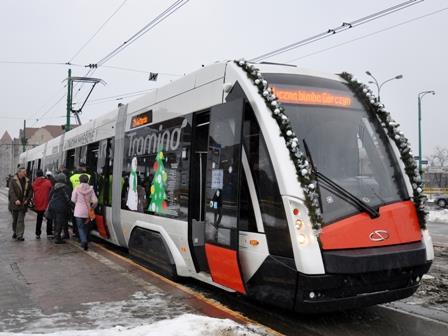 POLAND: A Solaris Tramino low-floor tram decked in festive Christmas designs has been running in Poznań to raise money for children suffering from Ehlers-Danlos syndrome, an incurable hereditary condition.

The 32 m long five-module articulated prototype vehicle currently in passenger service is 2 350 mm wide and has a narrow lower body profile. However, the 40 unidirectional units for MPK Poznań, which will start to arrive in spring 2011, will be slightly wider at 2 400 mm and will have straight–sided skirts and a 750 mm-wide aisle (RG 11.10 p71).

The welded steel bodyshells will be fabricated at a new facility in Środa Wielkpolska, with final assembly to be undertaken in Poznań. Production began on September 7 and the first unit should be ready for testing in April 2011. Deliveries are due to be completed by March 2012.