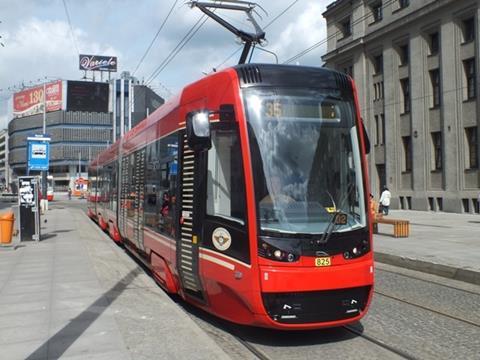 POLAND: Tramwaje Śląskie has announced its modernisation plan for the 2014-20 EU budget period. The estimated cost is 885m złoty, with EU funds expected to cover at least 63% of this.

The plan envisages the purchase of 44 trams and some maintenance vehicles, as well as the modernisation of 100 track-km. In addition, the authority plans to build three new sections of line.

The longest of these would be a 5 km double track extension of Route 15 in Sosnowiec from the current terminus of Zagórze east along ul Białostocka, south along ul Paderewskiego and west along ul Rydza Śmigłego and ul 11 Listopada, before joining Route 27.

Nearly as long would be a 4·5 km extension from the Brynów turning loop south towards Piotrowice district in Katowice. Katowice is also in line for a 600 m link that is to be built along ul Grundmana.

A further 4 km route from Politechnika Śląska to Miechowice district in Bytom is not in the plan, but TŚ has said that it would like to build it if Bytom city authority can be persuaded to approve the plan.

During the 2007-13 EU budget period TŚ undertook an extensive modernisation programme, which initially envisaged the upgrade of 48 track-km, the purchase of 30 Pesa Twist trams and the refurbishment of 75 Type 105N trams. However, the availability of extra EU funds meant that the project was expanded to cover an additional 15 track-km and 12 Modertrans Moderus Beta trams. Eventually the combined value was 627m złoty, with EU funds covering 490·5m złoty.