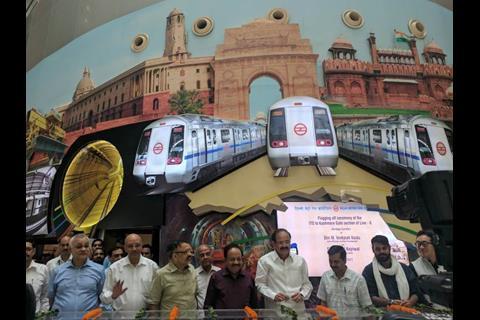 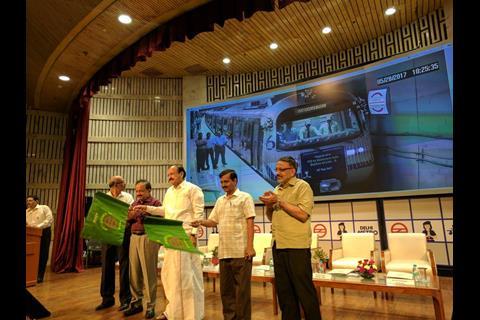 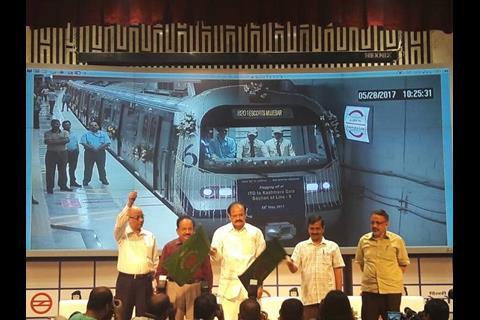 INDIA: The latest section of the Delhi metro network opened to passengers on May 28, when Minister of Urban Development Venkaiah Naidu and Chief Minister of Delhi Arvind Kejriwal flagged off the first train on the ITO – Kashmere Gate section of Line 6. With this 5·2 km extension, the network has grown to 218 route-km with 164 stations.

The northern extension is entirely underground, and has intermediate stations at Delhi Gate, Jama Masjid and Lal Qila. Delhi Gate has been designed with provision for interchange with lines that are due to open as part of the planned Phase IV network expansion, and Kashmere Gate is the first station on the metro to be an interchange for three lines.

Two entrances at Lal Quila and two exits at Jama Masjid have been fitted with ‘dream gates’ that allow mobile ticketing. Delhi Metro Rail Corp says that the pilot is the first time this technology has been used anywhere in India.

Services run at headways of 3 min 20 sec in the peaks. The northern section of Line 6 is intended to relieve Line 2 between Central Secretariat and Kashmere Gate.

The new section has been nicknamed the ‘heritage corridor’, as it runs close to some of the city’s historical monuments, including the Jama Masjid and Red Fort. The National Monuments Authority gave clearance for construction work in February 2013, and DMRC worked with culture body INTACH to comission artworks for the stations.

‘Providing world-class connectivity to the old Delhi areas has been one of our priorities and this new corridor will connect old Delhi, the heart of the capital city, with many new areas including the satellite city of Faridabad in Haryana’, said Naidu at the opening ceremony.

Line 6 is now 43·4 km long and connects Kashmere Gate in the north with Escorts Mujesar in Faridabad to the south. A 3·2 km southern extension to Ballabhgarh is currently under construction.