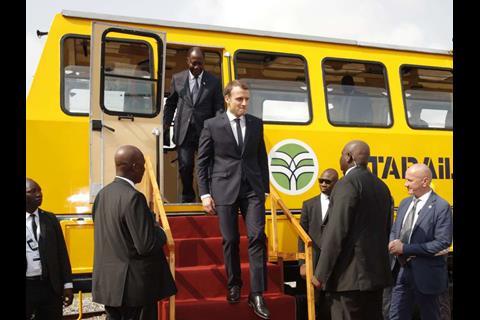 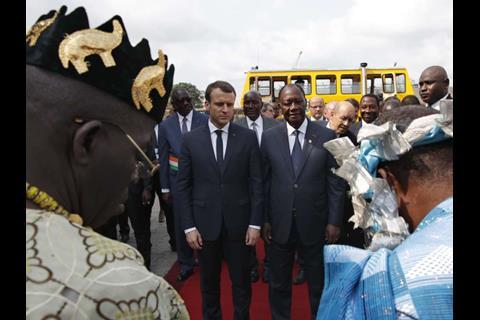 CÔTE D’IVOIRE: Construction work on the Abidjan metro project was formally inaugurated on November 30 by President Alassane Ouattara and his French counterpart Emmanuel Macron with a ceremony at the site of the future Treichville station.

Visiting the region for an Africa-Europe summit, Macron said the urban rail service would ‘change the life’ of the city’s residents, as well as encouraging economic development. Reducing the use of private cars would also contribute to the wider climate change agenda, he believed.

The French government is providing €1·4bn to support development of the north-south line as part of a €2·1bn package agreed in July. The 37·9 km route connecting Port-Bouët and Anyama will have 20 stations and is expected to carry 500 000 passengers per day.

Due to be completed by the end of 2019 for revenue operations to start the following year, the route will largely share the alignment of the existing metre-gauge Sitarail main line from Abidjan to Ouagadougou, which is to be extensively rehabilitated. A short southern extension will be built from the existing terminus to the Félix Houphouët-Boigny international airport at Port-Bouët.

Infrastructure work is to be undertaken by Bouygues and Thales, while Alstom is to supply the rolling stock; Keolis will be responsible for operations.

The line had initially been awarded to Dongsan Engineering and Hyundai-Rotem under a contract agreed in 2015, but after agreeing the French financing package the government bought out the South Koreans’ 42% stake in project company STAR (Société des Transports Abidjanais par Rails) in October.