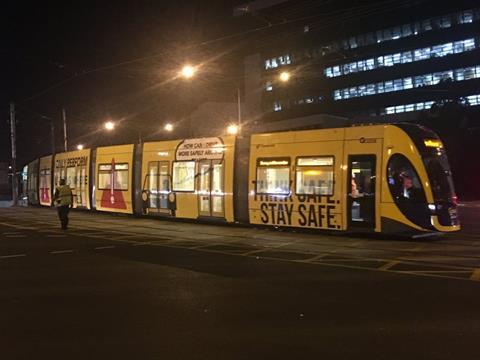 AUSTRALIA: Testing on Stage 2 of the Gold Coast light rail line commenced on the night of September 7-8.

The northern extension will run alongside Smith Street Motorway from Gold Coast University Hospital to Helensvale, where interchange would be provided with Queensland Rail services. The 7·3 km route would have intermediate stops at Parkwood East and Parkwood.

Major work began in August 2016 and is being undertaken by CPB Contractors. The A$420m cost is being met through a A$270m contribution from the Queensland government, A$95m from the federal government and up to A$55m from the city.

Opening is planned for April 2018, in time for the Commonwealth Games. Bombardier is supplying a further four Flexity trams, which are due to arrive by October.