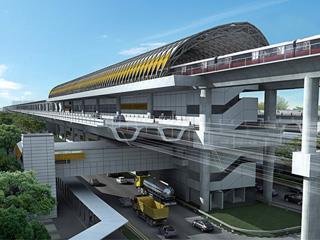 SINGAPORE: Construction of the Tuas West Extension project was officially launched when Minister for Transport Lui Tuck Yew attended a groundbreaking ceremony at the site of the future Tuas Link metro station on May 4.

'Over the next five years, there will be a new section of rail line opening every year, bringing about greater capacity and convenience to commuters', said the Minister.

The 7·5 km extension of the 49·7 km East -West Line from Joo Koon is scheduled to be completed in 2016. The line will be elevated on a viaduct which will be integrated with a 4·8 km road viaduct along Pioneer Road, increasing road capacity to cope with anticipated growth in traffic.

The metro extension is predicted to reduce travel times to the Tuas area by up to 35 min, with the four new stations at Gul Circle, Tuas Crescent, Tuas West Road and Tuas Link expected to serve more than 100 000 commuters a day.

China Railway 11 Bureau Group Corp has two civil works contracts, while Thales is to provide signalling under a €24m contract. Parsons Brinckerhoff has designed a 26 ha depot which is to be built to accommodate the 35 trains being acquired for the extension, with a total capacity of 60 trainsets to allow for future expansion.