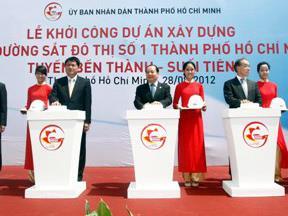 Completion is planned for late 2017, with six months of testing and commissioning to be followed by regular services in 2018.

The first 17·1 km elevated section of Line 1 between Ben Thanh Market and Suoi Tien Park with 11 stations is to be designed and built by a consortium of state-owned Civil Engineering Construction Corp No 6 and Japanese firm Sumitomo Corp, under a 15·3tr dong contract signed on May 16.

Separate contracts are to be awarded for a 2·6 km underground section from Ben Thanh Market to Bason Shipyard with three station. A third contract will cover railway systems.

The total cost of Line 1 is estimated at 47tr dong, of which 88% will come from Japanese official development assistance funds.

A total of six metro lines are planned for Ho Chi Minh City. Line 2 is already under construction, and basic designs have been approved for 3A and 3B.