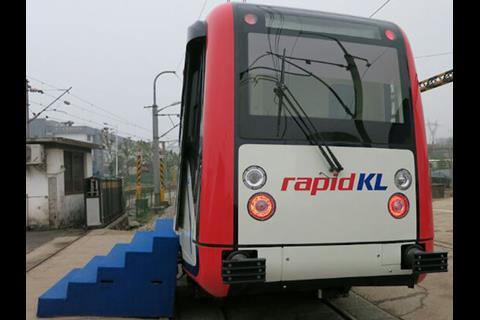 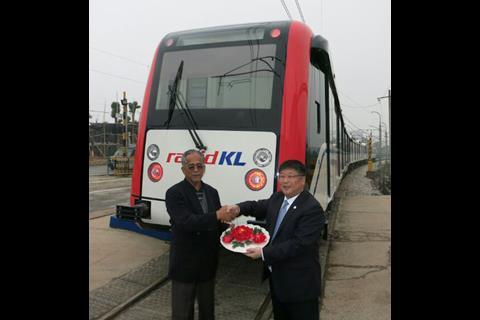 MALAYSIA: The first of 50 metro trainsets ordered for Kuala Lumpur's Ampang Line Extension Project was rolled out at CSR Zhuzhou's factory in China on February 27.

Transport authority Prasarana has ordered 50 of the trainsets, of which 30 are to replace the current fleet which has been in service since 1996, and 20 form part of the 17·7 km extension project which is expected to increase ridership from 200 000 to 400 000 passengers/day.

The design is derived from vehicles which CSR Zhuzhou developed for Izmir in Turkey, and reflects the steep gradients and 40 m radius curves on the Ampang Line.

The six-car trainsets will have a capacity of 1 308 passengers, six wheelchair spaces, dynamic route maps, CCTV and LCD infotainment screens. They will operate in attended automatic mode on the 750 V DC third rail line, at a maximum speed of 80 km/h.

The first trainset is expected to arrive in Kuala Lumpur by the end of the year. Stage 1 of the extension from Seri Petaling to Bandar Kinrara with four stations is now scheduled to open by October 30 2015, with the seven-station second stage to Putra Heights to be completed at the end of March 2016.

Meanwhile, in January Scomi Rail began delivering the first of 12 four-car trainsets ordered to increase capacity on the Kuala Lumpur monorail from 214 to 430 passengers/train. The new vehicles are lighter than those of the existing trains, and are designed to be able to run to the next station to allow passengers to disembark in the event of a flat tyre.