What are the issues in making metro stations accessible for persons with reduced mobility? 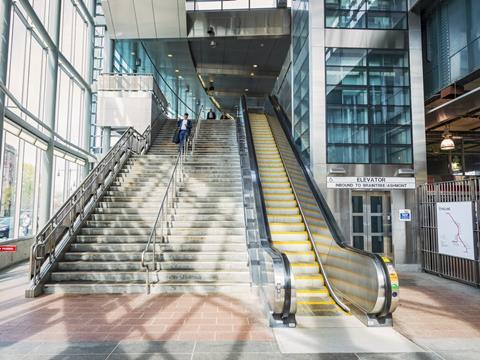 Most metro stations around the world rely on stairs for access to platforms. These are easy to build, especially for stations not far below the surface. However, this arrangement offers no accessibility for many people with disabilities — not only people who are permanently wheelchair-bound, but also passengers who have chronic pain, who rely on walking aids or who are temporarily injured. Furthermore, passengers carrying heavy luggage, such as those bound for airports, might prefer to avoid steps if possible.

As governments pass tighter disability access laws, and as the proportion of old people in developed countries rises, public transport operators have begun painstaking programmes of investment into accessibility, especially step-free access for passengers in wheelchairs.

New metros are generally designed to be friendly to disabled people. Typical features include step-free access to stations via lifts or ramps, tactile platforms, clear audio and visual announcements, and at least one fare gate at each access point wide enough to accommodate wheelchairs. In Singapore every station is accessible; in Delhi, most stations are. The same is true of new lines on old systems: in Paris, metro line 14, which opened in 1998-2007, is accessible. Across the English Channel, every Crossrail station in Greater London will have step-free access.

Whereas new metro systems are generally accessible, old ones are often not. They were built in the first third of the 20th century, or even earlier, long before accessibility was a public concern. Disability advocates in major global cities such as New York, London and Paris have demanded investment into accessibility. These cities are spending money to retrofit old infrastructure, but most stations still require the use of stairs.

In contrast with these cities, one medium-sized metro network from that era is almost fully accessible. The first line in Boston, the Green Line, opened in 1892; the last main line, the Red Line, opened in 1912. The Green Line features a central trunk that runs underground with several surface light rail branches. Many Green Line stops are not barrier-free, but the other three lines are conventional heavy metro lines, and all stations on these lines bar two are barrier-free.

The most accessible line is the Orange Line, explains MBTA’s Assistant General Manager for System-Wide Accessibility Laura Brelsford. Most of the Orange Line is new: although its central segment opened in 1908, its northern and southern ends were both realigned in the 1980s. Nonetheless, even old stations are accessible. Orange Line stations are simple — under a street, in an open cutting or elevated. Every platform has a lift near the staircases, and the Massachusetts Bay Transportation Authority aims to have at least two lifts per platform to provide redundancy. On the Orange Line, the lift is generally at the centre of the platform.

A disability advocate told Metro Report that placing the lift in the same place on every platform is doubly useful. Not only can wheelchair-bound passengers board and alight without moving far along the platform, but blind passengers can also orient themselves more easily. The situation on the Orange Line contrasts with that on the Red Line, where many stations are more complex and often have multiple exits, not all of which are equipped with lifts, making wayfinding more difficult. This is the result of construction techniques: some of the busiest stations on the Red Line were built as deep bores, with complex mezzanines under city squares with many access points. It is easier to make cut-and-cover stations accessible.

The Green Line is still more complicated, because it has sections above- and below-ground. It operates a mixed fleet of high- and low-floor light rail vehicles, which are designed for low platforms. Even the low-floor LRVs do not have level boarding, as this would cause their accordion doors to crash into platforms. Instead, they have driver-operated wheelchair ramps. Future LRVs will have sliding doors to allow level boarding.

Most surface stops are still not wheelchair-accessible, because passengers board from narrow platforms in raised street medians. Widening the platforms to make them accessible is possible, but politically difficult, as it would require reducing the amount of space for cars on the roads.

All stations have automated, audible announcements 5 min and 1 min before a train arrives, in addition to visible countdown clocks.

A longer-term controversy is whether to provide wheelchair access via ramps or lifts. Underground access means lifts, but at surface stops both options are available. The Blue Line is mostly on the surface in a segregated right-of-way, as it used to be a narrow-gauge commuter railway. For able-bodied passengers, access to most stations involves climbing steps to a footbridge and then descending to the platform. The height difference means that replicating this experience with ramps would require 500 m of horizontal distance, which is too long for most people who use manual wheelchairs.

Boston’s accessibility programme persists despite high construction costs. According to Brelsford, the full reconstruction of Government Center, an interchange between the Green and Blue lines, was $90m, and provided more than just wheelchair accessibility. She estimates the cost of new Green Line projects at $25m, including lift access and slightly raising the platforms to match the ramps deployed by the low-floor LRVs.

The cost of the step-free access programme in London appears to be lower per station than that in Boston. The planned £200m investment over the next five years covers 19 Underground stations. Two of these are new: Nine Elms and Battersea on the Northern Line extension, which is due to open in 2020. The rest are existing stations, and four more are to be made partly accessible. The programme also covers some stations on the London Overground suburban network.

The cost works out to be about £10m per Underground station, which is around two-thirds the cost in Boston, taking into account the different purchasing power parities. In Paris the costs are vaguer, but disability advocates claim that making the 300-station metro fully accessible would cost €4bn to €6bn.

The costs in New York are also vague, but the New York Times reports that a $1bn programme is making 25 stations accessible. These are predominantly large interchanges. The entire network, with around 350 stations outstanding, would need $10bn, or about the same cost per station as Boston.

Although the costs in London and Paris seem lower than those in Boston, accessibility on these networks lags behind Boston, and Paris lags behind even New York. This is the legacy of different national accessibility laws. The USA passed the Americans with Disabilities Act in 1990, and accessibility investments began even earlier, some going back to metros built in the 1970s. London prohibited wheelchairs on the Underground until 1993 for reasons of fire safety, and the UK began passing accessibility laws in 1995, continuing until the Equality Act of 2010. France only passed the Handicap Law in 2005. The USA thus had a substantial head start on Europe.

Thus, even with the expense of accessibility retrofits, old metros can afford to install system-wide step-free access over time. Boston is not the cheapest city in which to build, nor does it have the most favourable pre-existing infrastructure. But due to strict American accessibility laws, over time it has made its heavy metro lines almost entirely accessible, and is moving on to its light rail line.