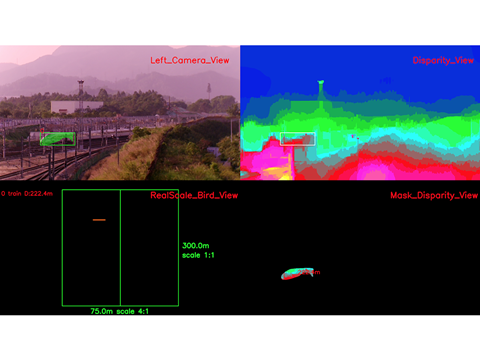 CHINA: US-based visual perception technology company PerceptIn has worked with rolling stock manufacturer CRRC to develop a long-range machine vision device for high speed trains which it says can automatically detect obstacles up to 1 000 m ahead, providing autonomous driving systems with the time needed to react.

PerceptIn is now in discussions with CRRC for an initial deployment on Chinese trains operating at up to 300 km/h.

‘LiDAR sensors, which are commonly used in autonomous driving scenarios, suffer from a lack of detection range and semantic information, making them unsuitable for high speed applications’, said Shaoshan Liu, Founder and CEO of PerceptIn. ‘Visual perception is currently the best solution that can be used in high-speed scenarios. With our 1 000 m visual perception technology, we’ve created the longest range visual perception capabilities for high speed rail while ensuring safety with critical functions such as obstacle avoidance and object detection.’

PerceptIn also hopes to use the technology for smart city, maritime and aviation applications, and is developing a version with a 300 m range which would be better suited to the needs of road vehicles.