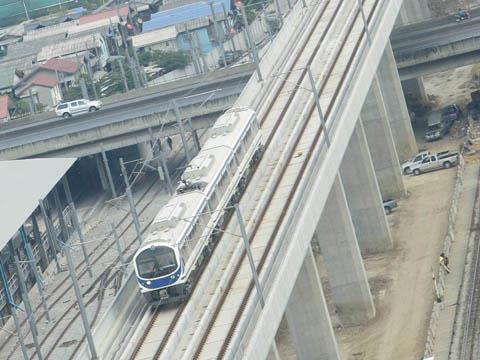 Meanwhile, the first contract for civil engineering work on the Purple Line metro is expected to be signed in March, following the opening of financial bids for Phase 1 by the Mass Rapid Transit Authority.

The lowest bid for the 12 km section between Taopoon and Rama III Bridge was submitted by the CKTC joint venture of Ch Karnchang and Tokyo Construction. CKTC's bid of 16·7bn baht beat rival bids from Italian-Thai Development (17·9bn baht) and Sino-Thai Engineering & Construction (17·1bn baht). The preferred bidder must be approved by Japan Bank for International Co-operation, which is financing the civil works.

As winner of first phase contract, CKTC is excluded from Phase 2 which encompasses the 11 km section from Rama III Bridge to Klong Bang Phai. Financial bids submitted by the other two consortia are due to be opened in February, with a contract expected to be signed in May.

Bids for a third contract covering the depot at Bang Yai and four park-and-ride facilities have been received from Italian-Thai, Sino-Thai, Takenaka-Ritta JV and PAR JV.