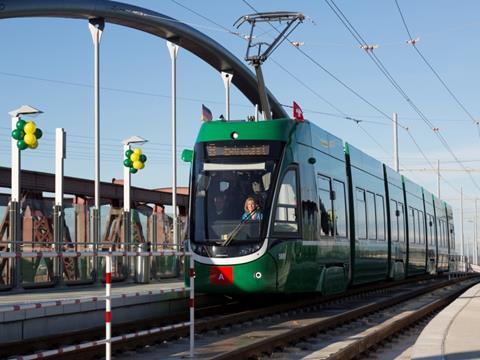 SWITZERLAND: A cross-border extension of Route 8 of the Basel tram network into Germany was officially inaugurated on December 12. Passenger services started on December 14 with a day of celebrations and free travel, including on heritage trams.

The 2·5 km extension of BVB’s Route 8 runs north from Kleinhüningen to Weil am Rhein, with two stops on the Swiss side of the border and three in Germany. BOStrab certification for all trams operating on the line was overseen by Stuttgart-based TAB, following the start of test running in September.

The total project cost was SFr104m. The Swiss government contributed SFr43m and the canton of Basel-Stadt SFr37·6m. Further financing came from the Land of Baden-Württemberg (€9·65m), the city of Weil am Rhein (€2·6m), Lörrach district (€1m) and BVB (€1m). The cross-border nature of the project made it eligible for EU funds, of which €1m was provided from the Regional Development Fund.

Route 8 becomes the second cross-border tram route in Basel. Route 10, operated by Baselland Transport, crosses into France, where it serves one stop before crossing back into Switzerland.