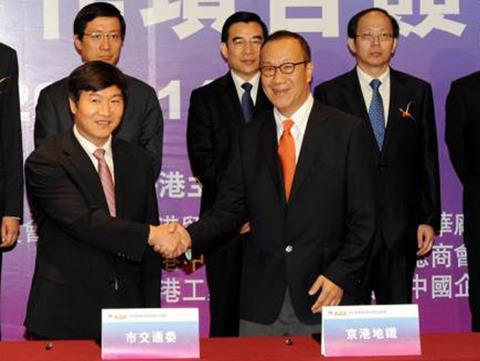 The Line 14 project is divided into two parts. Part A is being undertaken by Beijing Infrastructure Investment Corp and covers civil works accounting for about 70% of the project's 50bn yuan capital cost. Construction of the 47·3 km line started in 2010, with the first 12·7 km expected to open in 2013 and the rest of the line in 2015.

Under the PPP deal Beijing MTR would be responsible for Part B, covering electrical and mechanical systems, rolling stock and operation and maintenance for 30 years.

Line 14 will run from Zhangguozhuang in the southern Fengtai District to Shangezhuang in the eastern Chaoyang District, via Chaoyang Park and the Wangjing central business district. The 37 stations will include 10 interchanges.

'Line 14 will be the backbone of public transport between the southern and eastern parts of Beijing, and it will offer great convenience to the local community when it opens', said Richard Wong, General Manager of Beijing MTR, which currently operates Line 4 and the Daxing Line.