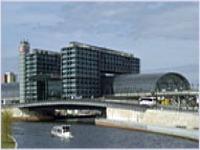 The bigger contract awarded by the local transport authority covers the missing section of U-Bahn line U5 between Alexanderplatz and Brandenburger Tor, where it will connect with the isolated route to the main station where BVG has operated a shuttle service as Line U55 since completion in 2009. As well as boring the 1·6 km running tunnels using a TBM and shield excavation, Bilfinger Berger will excavate the underground station at Museuminsel and build a cut-and-cover station at Unter den Linden.

The second contract awarded by DB to a joint venture including Bilfinger Berger covers the construction of tunnels for Line S21 between the Hauptbahnhof and a triangular junction with the northern side of the city’s S-Bahn ring. Including a mix of open cut and tunnelling, this will require pressurised excavation of the section below the main station.