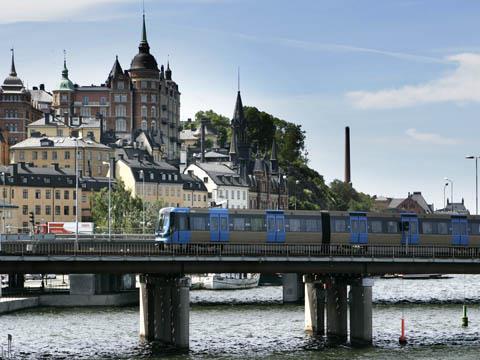 SWEDEN: Bombardier Transportation announced on June 6 that it had been awarded a contract by transport authority SL to supply 96 four-car EMUs for the Stockholm metro. The firm order is worth SKr5⋅1bn and the contract includes an option for up to 80 additional units.

Deliveries from the Bombardier plant at Hennigsdorf in Germany are due to commence in November 2016, with the articulated Movia C30 trainsets scheduled to enter service on the Red Line in early 2017. The 70 m long units will typically operate in pairs to form eight-car trainsets.

Bombardier says that the air-conditioned trainsets will have a driver’s cab at each end, but will also be ‘equipped with advanced driverless functionality’. Under an €80m contract awarded to Ansaldo STS in 2010, the Red Line is being equipped with CBTC, which will allow SL to increase peak frequencies from 24 to 30 trains/h by 2020.

In addition, according to the manufacturer, the C30 trains will feature ‘advanced passenger information system and fulfil the highest environmental standards regarding energy consumption and choice of almost entirely recyclable materials’. Riding on Bombardier Flexx Eco bogies and equipped with the ‘well-proven’ Mitrac propulsion system, the vehicles are expected to cover 150 000 km a year and offer capacity to carry up to 60 000 passengers/h.