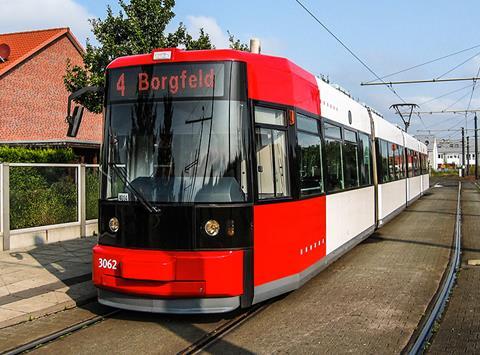 GERMANY: The Bremen Senate announced on November 10 that it had approved funding for capital expenditure on the city’s tram network.

The approved funds include €210m for the purchase of 67 new trams, for which a tender is to be called next year. Deliveries of prototypes are due to take place in 2018, with series deliveries to begin the following year. The Senate notes that the 77 GT8N trams dating from 1993-96 have exceeded their expected yearly mileage and are therefore prematurely coming to the end of their service life.

Capital investment in the tram network is forecast at €602·3m to 2053. This includes rolling stock procurement, as well as the modernisation of 10 trams currently in operation, which is due to take five years. Further costs will be incurred by infrastructure work in the depots at Neustadt, Sebaldsbrück, Gröpelingen and Neue Vahr, as well as maintenance of 77 vehicles.

The Land of Bremen is to bear €401·5m of the total cost, with the remainder coming from operator BSAG’s own resources.