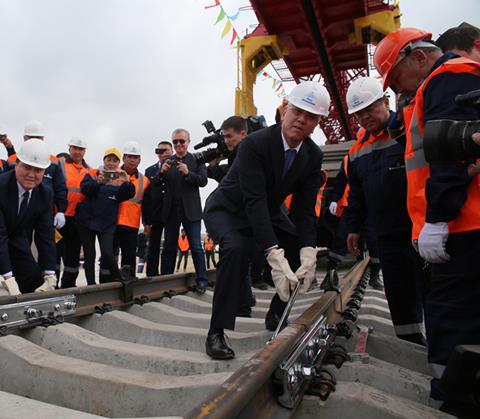 The first rails produced by Kazakhstan’s Aktobe Rail & Section Works using a rolling mill supplied by Siemens Metals Technologies were ceremonially laid by the President of national railway KTZ Askar Mamin and Almaty regional Governor Amandyk Batalov on April 7. They are to be used for double-tracking a 110 km section of the Almaty – Shu route. Mamin said developing a domestic rail production capability was of strategic importance for the national economy.

In order to obtain final regulatory approval, on April 4 the European Commission was formally notified of Wabtec’s planned acquisition of Faiveley Transport. Completion of the deal is expected by mid-year, depending on the timing of the approvals process.

North American tank wagon equipment supplier Kelso Technologies has entered into a product distribution agreement with Metal Goods Manufacturing, which supplier valves, fittings, and magnetic gauging devices for the rail, pipeline and gas industries. This is ‘another key step in our strategic plans to grow our revenues and profits from additional product sales per tank car’, said Kelso CEO James R Bond on April 4.

Container, modular building, barge and wagon leasing company Touax has reported that revenue from its rail activities totalled €43·2m in 2015, down 8% on the previous year. Its European wagon leasing business is being strengthened, and ‘should benefit from economies of scale in an improving market’ this year.

Kazakhstan’s Kamkor signed of a memorandum of co-operation with Wabtec during a management tour of US suppliers in March. ‘Wabtec believes that Kazakhstan has a high potential and is an attractive market for mutual co-operation’ said Kamkor’s Managing Director Dimash Khasenov, adding that he expects to sign contracts shortly with Wabtec’s Triangle Engineered and Young Touchstone businesses.