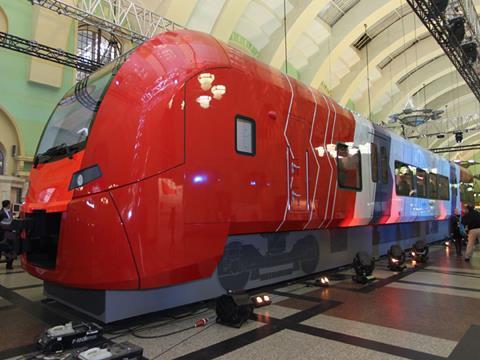 ‘Preliminary contracts’ worth ‘around €2bn’ were signed at the 1520 Strategic Forum in Sochi on June 1 by Siemens Mobility CEO Dr Hans-Jörg Grundmann, Dimitry Pumpyansky, Chief Executive of the Sinara Group, and RZD President Vladimir Yakunin covering supply of 1 200 vehicles in 240 trainsets, to be produced at a manufacturing facility near Yekaterinburg.

Siemens has also agreed that the last 16 of 54 Desiro RUS EMUs being supplied to RZD ahead of the Olympic Winter Games in Sochi in 2014 would be built by Train Technologies; the first of these would be rolled out in 2013.

Siemens has started assembly of the initial batch of 38 trains — known as ‘Lastochka’ or ‘Swallow’ by RZD — at its Krefeld plant in Germany; the first units are expected to enter traffic on RZD’s North Caucasus Railway in the second half of 2013.