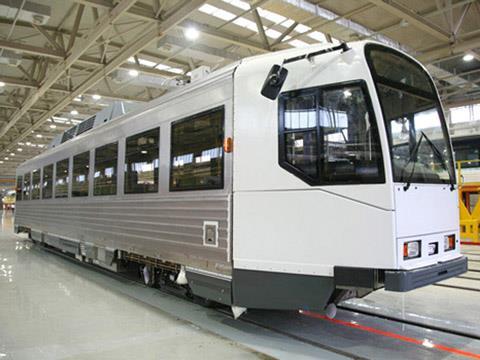 CHINA: CSR Nanjing Puzhen has rolled out the initial two of 22 light rail vehicles which it is building under the first contract for LRVs to be supplied to Hong Kong from mainland China.

A partnership of the Chinese firm and Australia's United Group Rail was awarded the contract for 22 LRVs on January 25 2008. This was CSR Nanjing Puzhen's second order from beyond mainland China, following a contract to supply multiple-units to Georgia.

UGR is responsible for the overall design of the welded stainless steel bodied cars, with CSR Puzhen undertaking assembly and commissioning work.

The cars are 20 m long and 2·6 m wide, with 2+1 seating and three doors on the left-hand side. The first car came off the production line on July 23, and deliveries are scheduled for November.