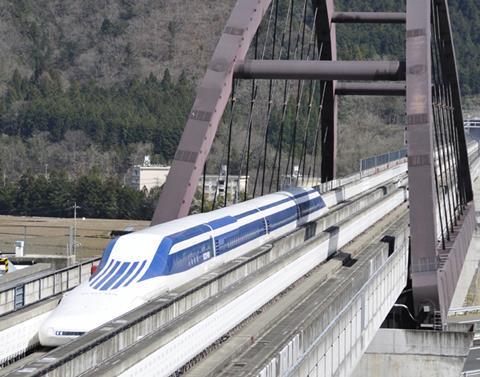 JAPAN: Central Japan Railway Co has revealed details of the alignment of the planned maglev line from Tokyo to Nagoya. Announcing the route on September 18, the company said that it aimed to start construction work on the ¥5·4tr project next year, subject to government approval.

Releasing information about station sites, maintenance depots and the length of route located in tunnel, JR Central said that the 286 km route had been defined within a 10 m wide strip. Previously, the route had only been defined as a 3 km wide corridor.

Intermediate stations are planned at Sagamihara in Kanagawa prefecture, Kofu in Yamanashi prefecture, Iida in Nagano prefecture and Nakatsugawa in Gifu prefecture. In Tokyo, the terminus will be located at Shinagawa, with local media reporting that the two maglev platforms, each able to accommodate two maglev trains, will be built parallel to the existing Tokaido Shinkansen platforms.

Depots have been allocated a 50 ha site in the Toya district of Midori Ward in Sagamihara and a 65 ha plot of land near the Sendanbayashi district in Nakatsugawa.

Only 40 km of the route will be at grade or on viaduct, the remainder being built in tunnel as the route lies through Japan's central mountain ranges, including the southern Japan Alps. Even the surface sections may be covered by acoustic hoods to minimise transmission of noise to surrounding areas. In urban sections the tunnels may run as deep as 40 m underground. Special measures are envisaged to minimise the potential for damage from earthquakes - the alignment will cross a number of geological fault lines.

With services running at a maximum speed of 505 km/h, the proposed journey time from Shinagawa to the future underground maglev station below the existing Shinkansen station in Nagoya is 40 min. If work begins as planned, the line could be open in 2027. Extending the route to Osaka would cost a further ¥3·6tr with completion envisaged around 2045.

Before the announcement JR Central issued environmental consultation documents to local authorities along the route - the alignment cuts through seven prefectures and passes through 39 municipalities. Briefings for local residents are being arranged from September 20 to November 5, while project documents are being made available for the public to consult at environmental offices located along the route.