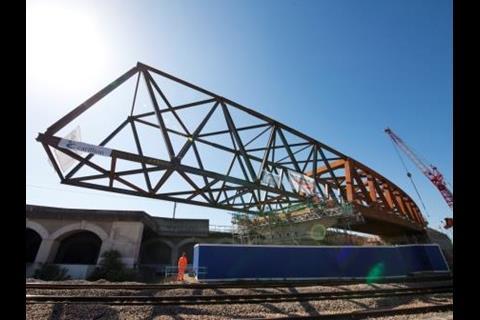 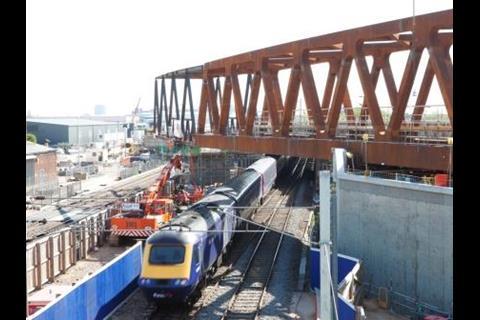 UK: On May 27 Crossrail Ltd announced that work had been completed to launch a 120 m long bridge weighing 1 000 tonnes into position over the Great Western Main Line at Stockley in west London. The bridge forms part of an additional flyover that is being built to avoid conflicting movements between Crossrail and Heathrow Express services heading towards central London and other trains using the GWML.

Two jacks were used to move the new bridge into position. A total of 20 moveable wheels and Teflon sheets were also deployed to slide the structure in place.

‘We used innovative methods as this was a complex and difficult operation’, said Rob McIntosh, Crossrail Programme Director at Network Rail, which is responsible for delivering surface works for the project. ‘The system of sliding the bridge over the railway line allowed for controlled and safe installation with minimal interruption of rail services’.

Crossrail services are due to start running between London Paddington and Heathrow Airport in 2018. Once the project is fully completed in 2019, Crossrail services will run between the airport and destinations in east and southeast London via the new tunnel under the city centre.

‘The new flyover at Stockley is an essential part of our works in west London, ensuring that the network has enough capacity to run frequent services to and from Heathrow’, said Matthew White, Surface Director at Crossrail Ltd. ‘Crossrail will significantly improve transport links to the airport, bringing the West End, the City and Canary Wharf closer than ever before’.