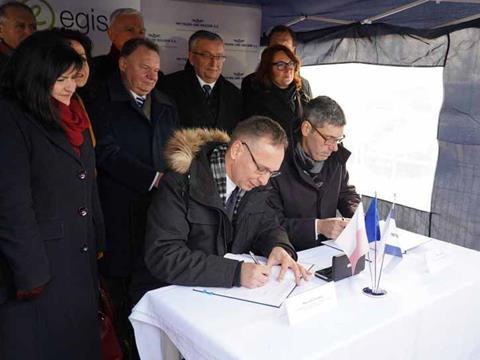 POLAND: Infrastructure manager PKP PLK signed a 180m złoty contract at Podłęże station on January 7 for design work for a new route linking Podłęże with Tymbark and Mszana Dolna, as well as modernisation of the Chabówka – Nowy Sącz route.

PKP PLK says that the new route would allow journey times between Kraków and Zakopane to be reduced to less than 2 h, with journeys from Kraków Główny to Nowy Sącz taking less than 1 h. The project will also relieve some freight routes in Górny Śląsk.

A consortium led by Egis Rail and including Egis Poland and MGGP will undertake work including project documentation, land acquisition and preparation of tender documentation for the civils phase.

Electrified double-track routes are to be built from Podłęże to Tymbark and from Szczyrzyc to Mszana Dolna, totalling 46 km. Equipped with ETCS Level 2, these would be designed for passenger trains running at up to 160 km/h and freight services operating at up to 120 km/h.

ETCS Level 2 will also be installed on the Chabówka – Nowy Sącz route, which will enable speeds of up to 120 km/h for passenger and 100 km/h for freight services. A total of nine stations are to be modernised.

The contract runs to 2021. Work on the subsequent two phases of the project is scheduled to start in 2020 and last until 2024 and 2027, respectively. The total project cost is 7bn złoty.