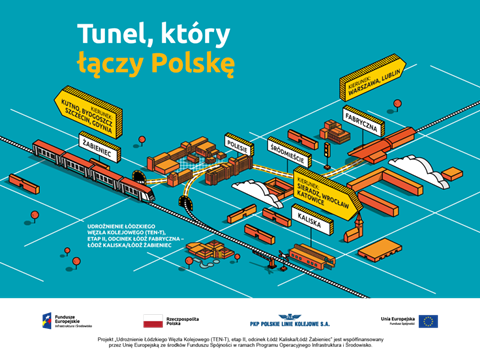 POLAND: The contractor building the Łódź cross-city tunnel has signed a contract for Herrenknecht to supply two tunnel boring machines. Work on the project is expected to begin in mid-2019, with the first TBM ready by the end of the year.

A 13·04 m diameter TBM, the largest used in Poland to date, will bore 3 km of double track tunnel from Łódź Fabryczna to a junction where the new line will divide. Two new stations are to be built on this section, at Polesie and Śródmieście. Łódź Fabryczna, currently a terminus, will become a through station.

The other 8·76 m TBM will bore four single-track tunnels, totalling 4·5 km, from the junction towards Łódź Żabieniec in the north and Łódź Kaliska in the south, where the lines would meet the existing main line.

In December 2017 infrastructure manager PKP PLK signed a contract for the works with a consortium of Energopol Szczecin and PBDiM Mińsk Mazowiecki. The EU is providing 1·43bn złoty towards the 1·76bn złoty project.