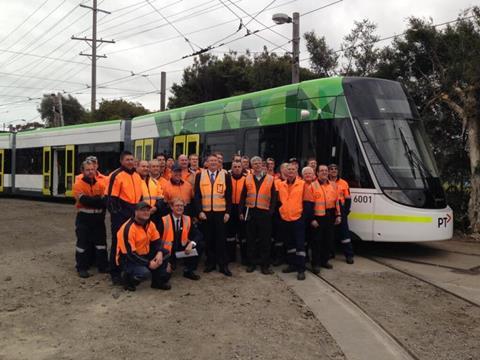 AUSTRALIA: The first Bombardier E-Class tram for Melbourne was unveiled at Yarra Trams’ Preston depot on July 1. Among those present were Premier of Victoria Denis Napthine and Minister for Public Transport Terry Mulder.

The tram arrived from Bombardier’s factory in Dandenong. It is about to begin tests on the Melbourne network before entering passenger service later this year on route 96.

Under a A$303m contract awarded in 2010, Bombardier will initially supply 50 low-floor trams. These will be introduced over the next few years. The three-section tram is 33 m long and 2 650 mm wide, with capacity for 210 passengers, making it the longest tram to run in Melbourne. The air-conditioned vehicles will have wheelchair spaces, and internal and external CCTV cameras to monitor passenger boarding and road traffic.

The introduction of the new trams will coincide with accessibility improvements at stops, power upgrades and extra depot and maintenance facilities.