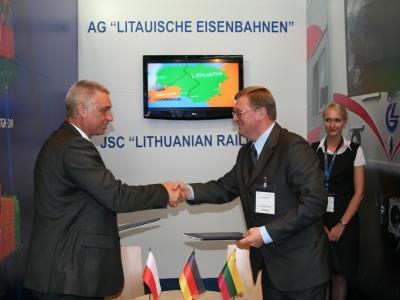 LITHUANIA: An increase in rail freight traffic between central Europe and the Baltic States is expected following the signing of a co-operation agreement between DB Schenker Rail Polska CEO Hans-Georg Werner and the Director General of Lietuvos Geležinkeliai Stasys Dailydka at the Transport Logistic fair in München on May 10.

The agreement will allow DB Schenker Rail to operate from Poland into the Lithuanian station at Šeštokai, which is approximately 10 km from the border. A new transhipment facility and storage yard is to be developed here, at the break-of-gauge between Poland’s 1 435 mm gauge and the 1 520 mm gauge network in the Baltic countries.

The first traffic to operate under the new agreement will be timber, which will be reloaded at Šeštokai. But over the longer term the two railways expect to see significant growth in container traffic. DB Schenker Rail Polska plans to use some of its Class 232 diesel locos, which are already approved for operation in Lithuania.

The two railways envisage the development of a north-south freight corridor from Poland to Riga in Latvia using existing lines via Šeštokai, Marijampole, Kaunas and Šiauliai, as part of the EU-promoted Rail Baltica project. The cross-border route between Trakiszki and Šeštokai currently provides the only direct connection between the railways of the Baltic States and the standard gauge network within the European Union. Early reinstatement of gauge-changing passenger services is not currently envisaged.