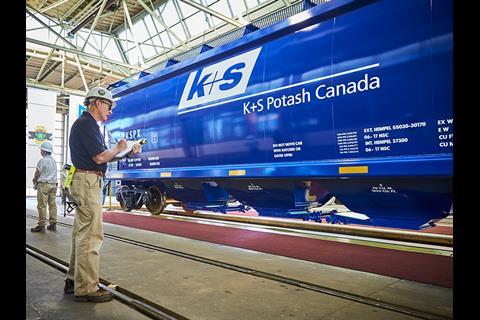 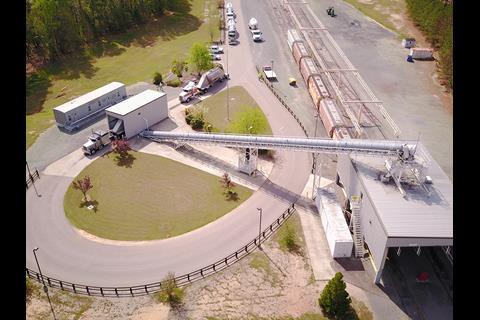 Trinity Chemical has ordered 50 tank wagons from US manufacturer Vertex Railcar, with a letter of intent for up to 300 more to be supplied within two years.

South Korean car manufacturer Kia has completed a rail terminal at its plant in Pesquería in the Mexican state of Nuevo León, with two tracks able to accommodate a total of 18 wagons connected to the Kansas City Southern de México network. The terminal is expected to handle up to 540 cars a day which will no longer have to be moved by road to the nearest railhead.

Rail Cargo Operator has delayed from June 19 until later this year the planned launch of an intermodal freight service between the Interporto Quadrante Europa di Verona terminal and Arad Railport, which would offer a journey time of 40 h. RCO said it sees 'huge potential' for the 1 109 km route between the important industrial region of Italy and Romania, as there are large flows of goods which currently travel predominantly by road.

K+S Potash Canada's Bethune mine in Saskatchewan has taken delivery of the first of 200 wagons which are being supplied by National Steel Car for domestic traffic. They are to the same specification as wagons which NSC supplied last year for export traffic, but are painted blue rather than grey. A single top opening enables them to be loaded while moving.

Genesee & Wyoming's Atlantic & Western Railway has opened a Choice Terminal bulk transload facility in Sanford, North Carolina. 'The Sanford terminal provides non-rail-served businesses in the Raleigh-Durham and surrounding areas with the ability to not only reduce transportation costs, but also manage their inventory, utilise just-in-time delivery and shrink their carbon footprint by eliminating the use of long-haul trucks', said ATW President Andy Chunko.

Dimerco has organised the rail transport of nine containers of high value furniture from Hamburg to Zhengzhou, for onward road transport to Beijing. The transit time was 14 days, compared to 30 by sea. 'We were required to adhere strictly to the agreed timescale, which would obviously include time for customs clearance, so rail seemed ideal' said Assistant Sales Manager Lexi Zhang. 'One of our containers was held up by customs in Poland due to an unrelated, wrongly-declared container that shared the same wagon; we made sure that one container did not delay the remaining eight containers.' The customer's preferred method of shipping is usually air or sea, but it has now committed to further rail shipments.