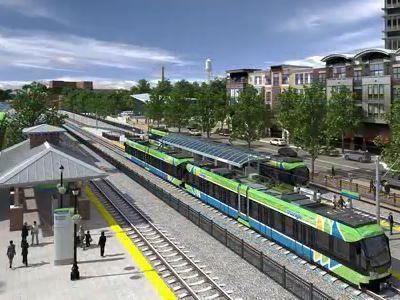 ‘Transit-oriented development is critical to the success of new projects and to the economy of the local communities they serve’, said FTA Acting Administrator Therese McMillan.

Six of the 21 projects concern BRT corridors. The remaining 15 cover a mixture of urban rail modes.

The largest single grant, of $2m, is going to Sound Transit and the City of Tacoma. This would be used to develop a plan for TOD along the proposed 4 km Tacoma Link light rail extension.

Transport projects in Florida have been allocated $2·5m. Half of this is going towards promoting TOD along the proposed Tri-Rail Coastal Link, a 137 km commuter rail line connecting Miami with Jupiter to the north. The other half will be used to study TOD in Fort Lauderdale, including on the planned Wave Streetcar route.

GoTriangle in North Carolina is to receive $1·7m for TOD along the Durham-Orange Light Rail corridor between Durham and Chapel Hill.

Sacramento Area Council of Governments has been allocated $1·1m to encourage TOD around the planned Downtown Riverfront Streetcar. San Francisco BART will receive $1·1m to support TOD activities in San Francisco and Oakland. A further $600 000 is being spent on development of tools to plan for TOD and multimodal access improvements along the Caltrain commuter rail corridor between San Francisco and San Jose, with three station areas selected for more in-depth studies.

At the other end of California, the San Diego Association of Governments is to receive $430 000 to encourage TOD and improve access at stops along the planned Mid-Coast Corridor Transit Light Rail project, which will extend the existing Blue Line by 17·7 km.

Two projects in Atlanta are on the list. MARTA is in line for $1·6m to create a strategic plan for TOD on the I-20 East Corridor, which includes a 19 km metro extension to the northeast of the city. The City of Atlanta is getting $500 000 to implement its BeltLine Transit Supportive Land Use Implementation Plan, a strategic outline of actions to be implemented along 26 km of the streetcar corridor.

A $1·25m grant is intended to help Chicago Transit Authority to develop a TOD plan to go with the Red and Purple line modernisation project. Northern Indiana Commuter Transportation District is to receive $300 000 to study TOD at stations along the planned 15 km West Lake extension of the South Shore Line from Hammond to Dyer.

Connecticut Department of Transportation is to receive $700 000 to advance TOD at four new and two relocated stations proposed for the New Haven – Hartford – Springfield commuter line.

The FTA is to disburse $641 000 to Niagara Frontier Transportation Authority for TOD plans between Buffalo and Amherst, where the authority is studying light rail among other transport options.

Valley Metro and the City of Tempe have been earmarked $250 000 for a two-year pilot programme for TOD along the Tempe Streetcar route.