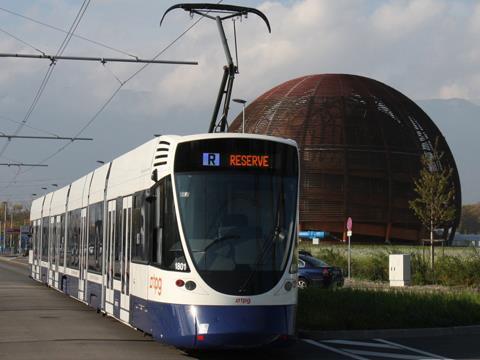 SWITZERLAND: Genève tram operator TPG is testing a prototype supercapacitor energy storage unit which allows braking energy to be recovered, and enables a tram to run for short distances without an external power supply.

The 1 tonne supercapacitor unit has been installed on the roof of one of a batch of 32 Tango trams being delivered to TPG by Stadler Rail. It can store the equivalent of the entire kinetic energy of an empty tram moving at 55 km/h, according to Stadler, and is more effective than batteries at absorbing and releasing the high short-term currents produced during braking.

Energy regenerated during braking is reused as the vehicle starts to move, when its power requirement is highest. The stored energy can also power the tram for at least 400 m if the overhead supply should fail. A distance of 1500 m has been achieved with careful driving under low-acceleration, low-speed test conditions.

The prototype is undergoing extensive testing by TPG, Stadler and traction equipment supplier ABB. Its energy consumption is being compared with the rest of the Tango fleet equipped for conventional regenerative braking which feeds current back into the overhead supply.

If the tests prove successful, the other 31 Tango vehicles for TPG could be equipped with supercapacitors 'relatively easily'.