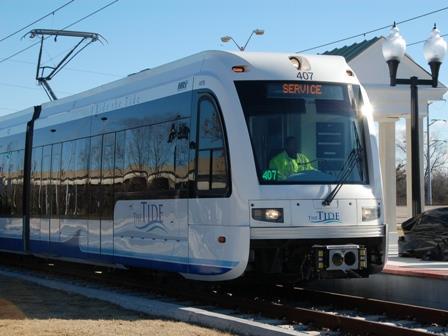 USA: A light rail vehicle was towed through the streets of Norfolk on January 5, marking the start of tests on the overhead power lines for the city’s starter light rail line.

However, the opening of Norfolk’s first tram route has now been postponed indefinitely, adding to the 16 months of delays that the project has already suffered. Hampton Roads Transit President & CEO Philip Shucet said he was not in a position to say how long the delay will be but expressed confidence that revenue service would begin in 2011.

The newest problem has been caused by late delivery of electrical and safety components for level crossings, including equipment that provides traffic signal priority for the LRVs. Elements of these systems were added to the contract after work had started. Once the equipment is delivered, installed and tested, HRT must allow 60 days of training for operators and communications staff.

Other aspects of the 11·9 km line, including track installation, catenary work and station construction, are almost complete.

Shucet said the delay would not add to the price tag, which is already $106m above the original budget. The cost over-run resulted in several management changes at HRT during the last year, including the recent retirement of Senior Vice-President for Development Jayne Whitney.