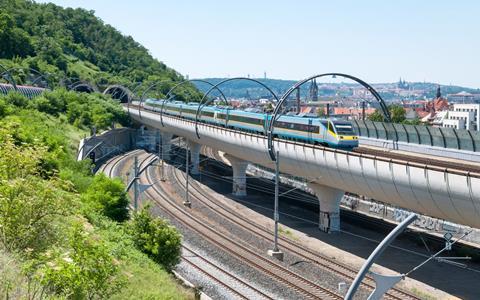 CZECH REPUBLIC: Infrastructure manager SŽ has finalised a further agreement with SNCF International to assist with the development of the country’s proposed network of high speed lines.

Co-operation between SŽ and the French national railway’s consultancy arm began in April 2019 with the signing of an agreement to draw up technical standards and design documentation for the future high speed network, preparing for the development of high speed lines in the Czech legislative and technical environment.

Under the new agreement, SNCF International will provide supervision and support for the development of land use and planning documentation as well as advice on proven technical solutions, covering all aspects of construction, commissioning, operation and maintenance.

‘In order to meet the strategic goal of starting construction in 2025 and putting the first line into operation three years later, the continuation of co-operation with SNCF is the optimal solution’, explained SŽ Chief Executive Jiří Svoboda, when he ‘signed’ the agreement with SNCF International President Diego Diaz by video conference.

‘Quality project preparation will reduce the cost of subsequent construction and operation. The co-operation with SNCF provides us with proven and optimised technical solutions and minimises the risk of errors. All lines of the French LGV system form a gradually developing comprehensive network with a number of connections to conventional rail.’

Svoboda predicted that ‘in 2020 and the following years, pre-project preparation will start in full swing, consisting mainly of the preparation of documentation for territorial decision proceedings. For the next stages, it is essential that the relevant design manual for the building permit documentation phase is completed by 2023 at the latest. SNCF experts are able to share with us not only 50 years of French high-speed know-how, but also their foreign experience in building high speed lines in Morocco, for example.’

Meanwhile, SŽ has re-invited bids for a KC240m contract to prepare documentation for its pilot section of high speed line including an environmental impact assessment of the preferred alignment. This 23 km section of the so-called VRT Polabí between Praha and Brno runs from Běchovice in the capital’s eastern suburb to Poříčany, where it will connect with the conventional line to Pečky and the Sadská – Nymburk route.

Preliminary market consultation for this contract took place last September, attended by 11 design and consultancy companies from the Czech Republic, Germany and France. However, the tender published in January only attracted one bid, from Sudop Praha, and was cancelled in March. Under the new call, bids are to be submitted by June 15. SŽ says the winner will be selected using the Best Value Approach/Best Value Procurement model, and will be expected to deliver the documentation within 14 months of contract signing.

Register on railwaygazette.com to read our in-depth feature on the Czech Republic’s high speed rail plans.