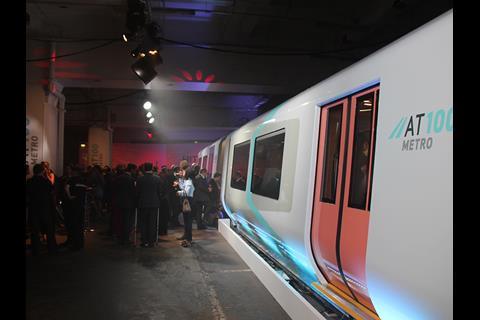 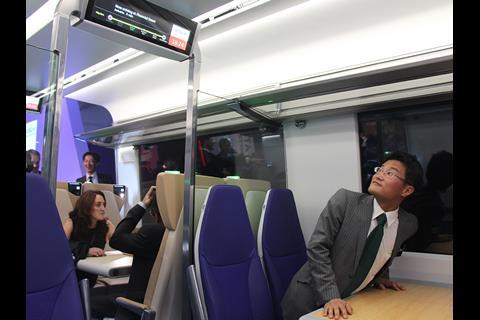 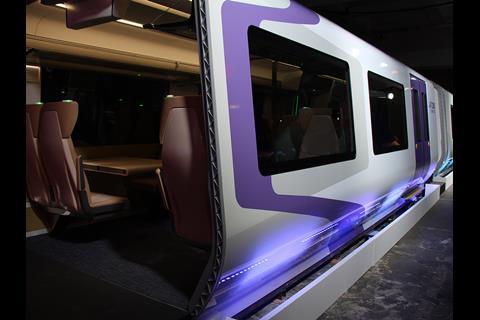 UK: Hitachi Rail Europe unveiled full-size mock-ups of its AT100 and AT200 EMU designs in London on July 21.

Aimed primarily at the UK market, the two designs are intended to augment the existing AT300 (Class 395/Class 800) design to create a family of trains. These can be configured using standard components to cover a wide range of applications. The AT100 is a high-density inner-suburban trainset with 20 m long cars for use on intensive metro-type services, while the AT200 is targeted at a wider range of commuter, suburban and inter-regional applications with operating speeds of between 140 km/h and 200 km/h. Nominal vehicle length would be 23 m.

Hitachi has already been shortlisted by Transport for London alongside Bombardier, CAF and Siemens to supply 39 four-car ‘metro-style’ electric multiple-units for London Overground services. The company expects to offer the AT200 when ScotRail calls tenders for EMUs to operate between Edinburgh and Glasgow upon completion of the EGIP upgrading and electrification programme.

Both the AT100 and AT200 trainsets meet the UK’s C1 loading gauge, with Hitachi suggesting that its use of friction-stir welded aluminium bodyshells ensures ‘go anywhere’ gauge clearance while maximising space in the passenger saloon.

Chief Operating Officer Andy Barr suggested that the engineering design ‘was still being finalised’, but the trains would be equipped for dual-voltage operation at 25 kV 50 Hz and 750 V DC. In the medium term, he suggested that lithium-ion battery hybrid variants would be offered for use over sections of non-electrified line of up to 30 km, adding that this technology had progressed ‘substantially’ since Hitachi undertook its Hayabusa trials with an IC125 trainset in 2007.

Wi-fi and mobile data networks would be fitted as standard to the trains to enhance the provision of passenger information in the saloon. Possible enhancements include the use of Hitachi cloud commuting storage to handle real-time seat reservation data; passengers could be encouraged to scan a QR code to verify that they are occupying the seat they have booked.

Alistair Dormer, Global CEO of Hitachi Rail Systems, confirmed that the company intends to build a demonstrator EMU of at least three vehicles next year, as a speculative venture at its own expense. Series production would take place at Hitachi’s Newton Aycliffe plant which is now under construction for opening next year.