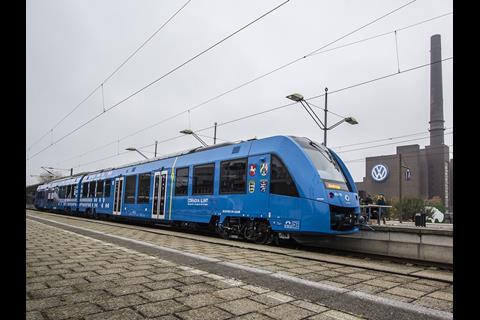 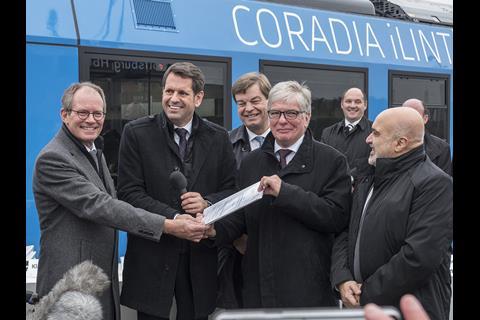 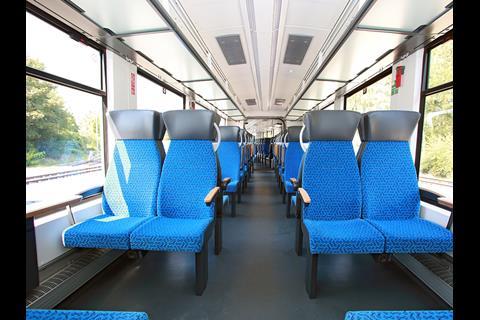 GERMANY: ‘Fuel cell technology has a good chance to prevail in Germany in the next 10 to 15 years, with diesel vehicles being more and more forced out of the market’, said Niedersachsen transport authority LNVG when it signed a 30-year contract with Alstom and gas supplier Linde Group for the delivery, maintenance and fuelling of 14 Coradia iLint hydrogen-fuelled multiple-units.

‘The use of hydrogen for rail vehicles is a milestone in the application of fuel cells for emission-free transport’, said Linde board member Bernd Eulitz at the ceremony in Wolfsburg on November 9. ‘For the first time, the coupling of this sector to hydrogen infrastructure will be realised with a significant scope and in an economically viable manner. This development will push the establishment of a hydrogen society and will create new solutions for the storage and transport of energy.’

The iLint multiple-units are to be built at Alstom’s Salzgitter plant, and will be leased by LNVG to its contracted train operator for use on Elbe-Weser services between Cuxhaven, Bremerhaven, Bremervörde and Buxtehude. The existing two-car prototype unit and a second unit are scheduled to enter service in spring 2018, with the rest of the fleet scheduled to replace diesel multiple-units from December 2021.

The trains will be maintained at an existing depot in Bremervörde where Linde will build a hydrogen fuelling point, with the estimated €10m cost funded by the federal government. The on-site production of hydrogen by electrolysis and wind energy is planned for a later phase of the project.

According to Alstom, the Coradia iLint will be able to operate at speeds up to 140 km/h and cover a distance of up to 1 000 km between refuelling.

The Land of Niedersachsen is providing €81·3m for the project. ‘From now on there will be a real alternative to diesel trains for non-electrified rail transport’, said Niedersachsen Economy & Transport Minister Olaf Lies at the signing event. ‘Hydrogen and fuel cells are an ideal combination for climate protection as well as for the energy and transport revolution. They allow the storage of energy and emission-free travelling on rail. We fund innovative technologies and make a sustainable contribution to the energy revolution in the transport sector.’

The Federal Ministry of Transport & Digital Infrastructure is contributing €8·4m from the National Innovation Programme for Hydrogen & Fuel Cell Technology.