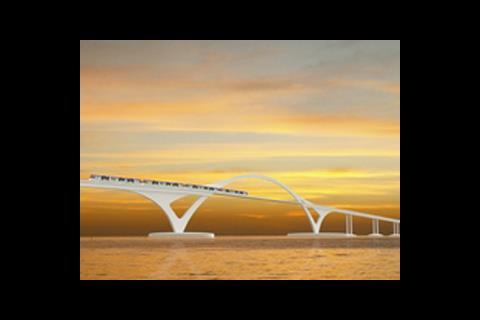 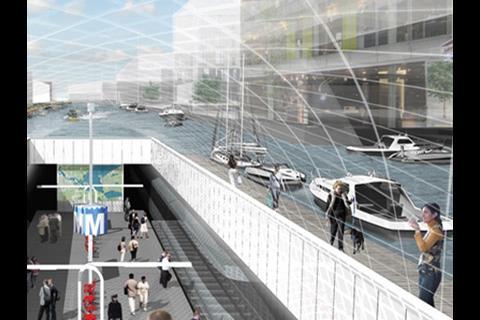 NETHERLANDS: Three feasibility studies for a direct metro line between Amsterdam and the growing satellite town of Almere across the IJmeer lake have been completed on behalf of development agency Werkmaatschappij Almere-Amsterdam. Two of the options will now be selected for further analysis, and the selected project could be completed in 2025-30.

The IJmeerverbinding (Ijmeer connection) is intended to support growth in the Amsterdam suburb of IJburg and Almere, where the population is predicted to grown from 192 000 to 350 000 by 2030. The go-ahead has been given for 25 000 homes subject to a second rail link being provided to relieve the existing Hollandsebrug road and rail bridge across the IJmeer. Six plans were proposed, of which three have been taken to the stage of a technical and economic feasibility study.

The M55 consortium including Mott MacDonald, MNO Vervat and Baca Architects was commissioned to develop a proposal based on a tunnel. A 20 km metro extension would run from Diemen-Zuid to IJburg, followed by a 9 km immersed tunnel under the IJmeer to reach to Almere Centrum. There would be three surface and two underground stations, with one of the underground stations at IJburg offering boat mooring spaces as what is claimed as the first 'sail and ride' facility. Material excavated from the tunnel would be used to create a new car-free island with 3 000 homes which could be served by Personal Rapid Transit. This plan is costed at €3·2bn.

Jacobs, APPM and Posad have proposed De Nieuwe Lijn as an elevated alternative. The metro would be extended from a relocated station and transport hub at Diemen, then cross the IJmeer by four cable-stayed bridges between new islands to reach Almere Pampus West. There would be shared running with the existing heavy rail line through Almere Centrum to reach a new terminus. The cost of this scheme is put at €2·6bn.

Movares has put forward RegioMetro, a proposal for a phased extension of the metro and a crossing of the IJmeer on an arched bridge. Priced at up to €2·5bn, this project could be completed in phases as required, which Movares says could help keep costs under control.