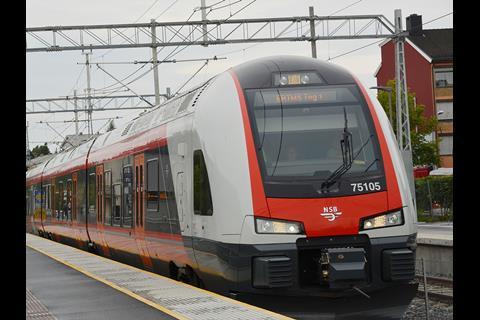 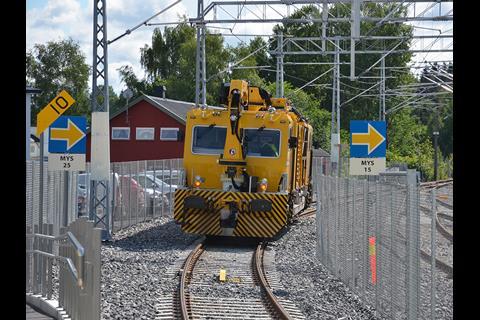 NORWAY: Services on an 80 km section of the Østfoldbanen southeast of Oslo are now running under ETCS Level 2, following the formal commissioning of the first phase of Jernbaneverket’s national ERTMS roll-out. The ETCS installation on the plot line between Ski and Sarpsborg was inaugurated by Transport Minister Ketil Solvik-Olsen on August 31.

The route has been equipped with Bombardier’s Interflo 450 Level 2 equipment (Version 2.3.0d), and all lineside signals have been removed. The pilot line is controlled from JBV’s Traffic Control Centre in Oslo using a single radio block centre, replacing conventional interlockings at the seven stations.

Nine of NSB’s Class 74 Flirt EMUs have been equipped with ETCS to operate 22 weekday services each way and 14 each way at weekends.

According to the minister, a total of NKr1·2bn has been invested in revitalising the secondary route, which was ‘more than a typical lottery win’. Half was spent on the signalling and train control systems, while the remainder was used to modernise the stations. New 250 m platforms have been built at Kråkstad, Tomter, Spydeberg, Askim and Mysen, able to accommodate two EMUs in multiple. The stations have also been equipped with passenger information systems, new lighting and accessibility improvements.

Following the establishment of JBV’s ERTMS project team in 2008, the route was selected for the pilot project because the Rakkestad – Sarpsborg section had no regular passenger service. Test trains began running in November 2013. The rest of the route has now been equipped to permit full passenger operation under ETCS Level 2.

Project manager Eivind Skorstad hopes to start prequalification early next year for the next phase of the project, which will see the introduction of ETCS on three routes: the Nordlandsbanen between Trondheim and Bødo, the Hønefoss - Bergen section of the Bergensbanen and the Ofotbanen which carries Swedish iron ore trains to and from Narvik. Contracts are to be placed in mid-2017, for installation in 2019-21. The Norwegian network is due to be fully equipped with ETCS by 2030.