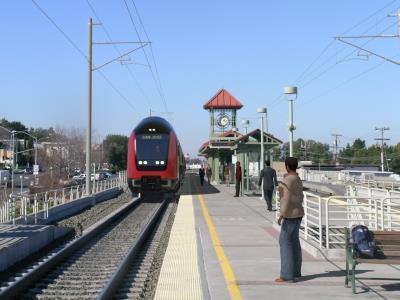 USA: Work to upgrade and electrify the Caltrain commuter rail corridor between San Francisco and San Jose to accommodate high speed trains is set to move forward, following the signing of a Memorandum of Understanding between the California High Speed Rail Authority and the Peninsula Corridor Joint Powers Board which owns and operates the route.

The MoU was approved by the CHSRA board on March 18, having been endorsed by the JPB on March 7.

Under its 'blended system' implementation strategy, CHSRA is contributing $705m from its Proposition 1A bond funding authorised last year towards the $1·45bn Caltrain Modernisation Program. This work includes upgrading, electrifying and resignalling the route by 2019, together with the acquisition of a new fleet of EMUs to replace the current diesel locomotives and double-deck push-pull trainsets. As well as enabling Caltrain to provide more services, the upgrading is expected to reduce the operator’s greenhouse gas emissions by over 90% and halve its operating costs.

'This MOU represents a new partnership', said CHSRA board member Jim Hartnett, adding that integration of the high speed line with regional rail operations was 'critical to the future of the state of California', as it would deliver 'all-important benefits at the local level'.