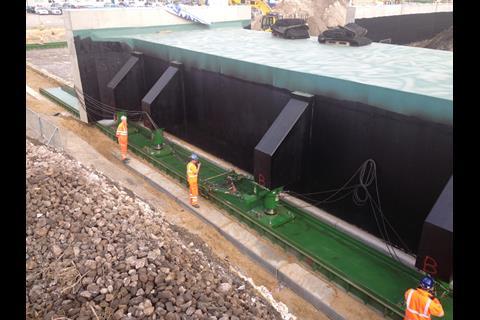 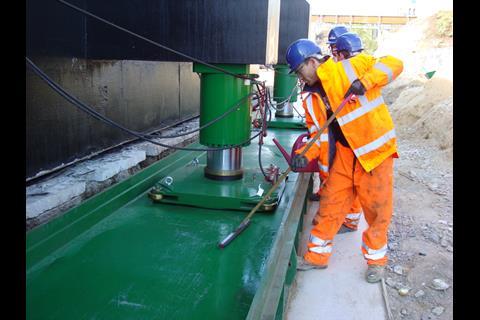 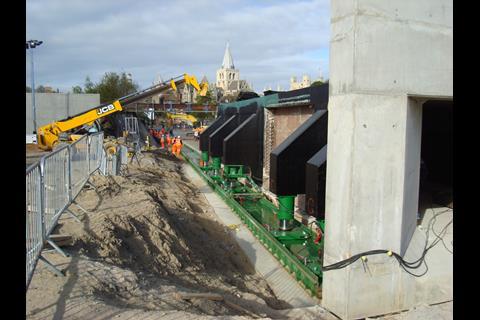 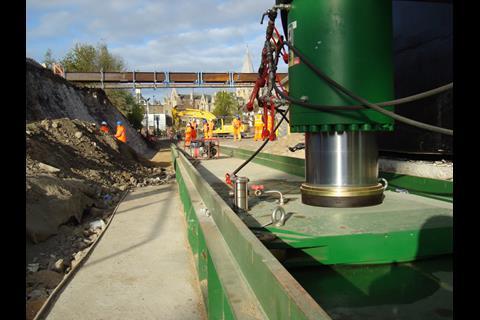 UK: An 800 tonne reinforced concrete underpass box 28 m long, 7·6 m wide and 4·0 m high with 0·5 m thick walls was installed through an existing railway embankment at Rochester during a four-day blockade on April 18-21.

According to infrastructure manager Network Rail, this was the first use on the UK network of air jacks filled with compressed nitrogen to lift a structure while hydraulic rams pushed it into place.

To minimise disruption to train services the box was built alongside the operational railway. A hole in the embankment was then excavated the day before the slide, which was undertaken by contractor Freyssinet using the Autoripage technique. The box was built with five lugs on each side for jacks, and each 385 tonne capacity jack was bolted to an Air Pad which ran along a steel skidway.

By injecting nitrogen gas at a pressure of 30 bar into the Air Pads they acted like mini-hovercraft, riding on a cushion of nitrogen along the skidways. The 1% friction between the Air Pad and the skidway meant a pushing force of only 8 tonnes was required during the 36 m move, which took 8 h. Backfilling was completed the next day ready for the track to be reinstated.

The underpass will form part of a new £25m station being built under a £147m upgrading project. The station is scheduled to open in late 2015, closer to the town centre than the one it will replace and with platforms able to accommodate longer 12-car trains.

The main contractor for the works is C Spencer, with Balfour Beatty and Atkins also involved.