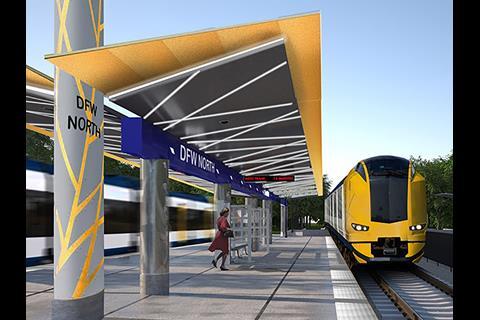 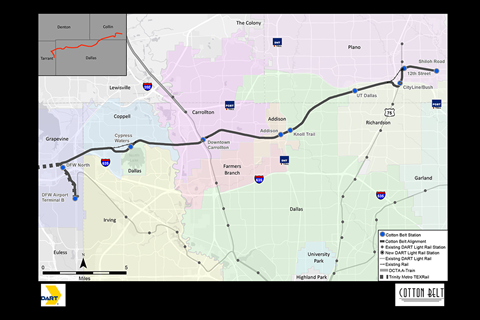 USA: Dallas Area Rapid Transit has awarded a joint venture of Archer Western and Herzog Contracting a $783m contract to build the 42 km Cotton Belt commuter rail line, with assistance from lead designer Jacobs Engineering. Construction is scheduled to begin this year for completion by the end of 2022.

The project is intended to improve connectivity between major employment and population centres in the northern suburbs of Dallas, an area which the federal Department of Transportation said is heavily congested and in need of additional transport capacity.

The route will start at Terminal B at Dallas/Fort Worth International Airport, where it will share a station with Trinity Metro’s 43 km TEX Rail commuter line from Fort Worth which is scheduled to open on January 5. From the airport the Cotton Belt line will run eastwards through Tarrant, Dallas and Collin counties to Shiloh Road in Plano, with 10 stations including interchanges with Orange, Green and Red light rail lines and local bus services.

‘North Texas is booming, and this reliable local transit option will be a welcome addition for many residents’, commented David Casey, President of Archer Western's heavy civil division.

The project will make use of an existing alignment used for regional freight services which DART acquired from the St Louis Southwestern Railway in 1990 with a view to future passenger use. This will be double-tracked and upgraded to the standards required for passenger services running at up to 126 km/h (79 mile/h). A fleet of eight diesel multiple-units is planned; these have not yet been selected, but would be required to be compatible with Flirt units which Stadler has supplied for TEX Rail.

The $1·1bn Cotton Belt project is being financed through a $908m Railroad Rehabilitation & Improvement Financing loan from the federal Department of Transportation which was confirmed by Secretary Elaine L Chao on December 21. This ‘demonstrates the Department’s commitment to serving as a trustworthy partner to regional and local agencies, which are at the forefront of developing infrastructure solutions to meet the needs of their communities’, said Chao.