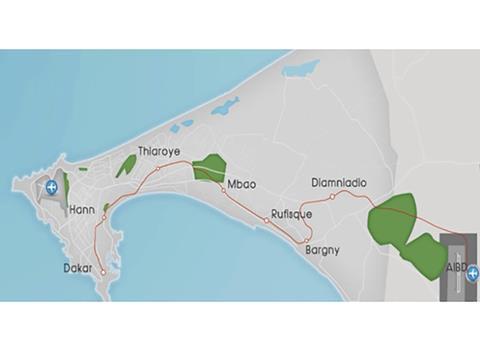 SENEGAL: State investment and public works agency APIX has selected preferred bidders for the construction of the Train Express Régional, a planned 1 435 mm gauge double-track line to be built in two phases to link Dakar with Diamniadio (36 km) and Blaise Diagne International Airport (a further 19 km).

A consortium of France’s Eiffage, local company CSE and Yapı Merkezi of Turkey has been selected for the CFAFr330bn civil works contract.

Energy services company ENGIE and subcontractor Thales supported by CSE have been selected as preferred bidders for a €225m design and build contract covering the power supplies, 25 kV electrification, signalling, train control and telecoms. Construction is scheduled to begin in the third quarter of 2016 and take 26 months, for completion in late 2018.

Alstom had previously been selected as preferred bidder to supply 15 four-car trains, which will be from the Coradia family and similar to units ordered for France and Algeria.

The TER project is being developed under the Emerging Sénégal social and economic development plan which was launched by the government in 2014. The line would have 14 stations and be designed for a maximum speed of 160 km/h, giving an end-to-end journey time of around 45 min. Ridership is estimated at 115 000 passengers/day.