DART Underground to be redesigned to reduce costs 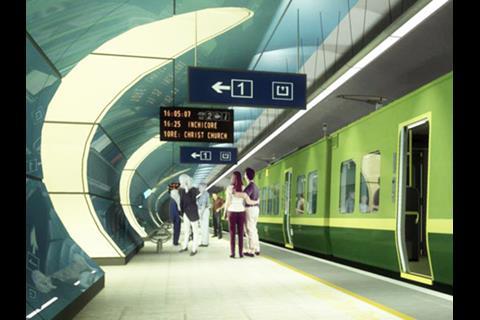 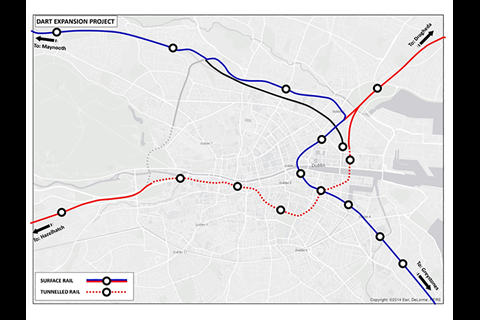 IRELAND: The €3bn DART Underground project in Dublin ‘will not proceed as currently designed’ but will instead be ‘redesigned to provide a lower cost technical solution’, Minister for Transport, Tourism & Sport Paschal Donohoe announced on September 22.

DART Underground is a proposed tunnel which would link the existing line into Dublin’s Connolly station from the north with Inchicore on the line running west out of Heuston station. There would be stations at Docklands, Pearse, St Stephen’s Green, Christchurch, Heuston and Inchicore.

This would form a major element of a €4bn DART Expansion Programme, which would also include electrification to Drogheda, Hazelhatch and Maynooth; an increase in frequencies on existing DART routes; four-tracking from Park West to Inchicore; level crossing removals; city centre re-signalling and depot expansion.

DART Underground received planning consent in 2011. However, the business case has been updated as part of the finalisation of a long-term transport plan for the Greater Dublin Area, and while the overall DART Expansion Programme was assessed as economically positive with a 1·4:1 benefit to cost ratio, the National Transport Authority said the business case for DART Underground prepared by Iarnród Éireann indicates that its development under the current railway order ‘is not economically justified’, with a 0·8:1 Benefit to Cost Ratio.

NTA believes that it would be possible to redesign the tunnel project to reduce its cost, while a substantial part of the benefits of the DART Expansion Programme could be derived from the non-tunnel elements.

Accepting the NTA’s recommendation to rethink the project, Donohoe said DART Underground remains a ‘key element’ of integrated transport plans, and funding for the redesign would be provided with a view to construction beginning after 2020. Existing compulsory purchase powers will not be activated, and new legal powers would be sought for the redesigned project.

‘As government works to further stabilise the public finances, we must continue to seek the best value for taxpayers’ money in everything we do’, said Donohoe. ‘A project of such magnitude - in the order of €4bn - has to be designed and delivered in a way that best ensures cost-effectiveness for the taxpayer and the state.’

In response to the announcement, Iarnród Éireann said it welcomed ‘support at government and National Transport Authority level that the DART Expansion Programme is crucial for national economic development and addressing traffic congestion in the Greater Dublin Area and beyond’, and the intention to fund redesign of DART Underground.